Just over seven years ago, in April 2009, journalist Gina Spadafori was at the VCA Veterinary Referral Centre in Sacramento with her beloved Flatcoat McKenzie who had just delivered seven puppies. The labour had stopped - but the rads showed two puppies still in there. Vet Dr Bill Porte said one was definitely dead, but he thought the other, trapped behind, could still be alive. Gina, however, was convinced both were dead. Dr Porte sent Gina home, promising to do his best. As she left, Dr Porte turned to her and said: "Gina? Have faith."

The last puppy was delivered alive later that night. Gina called her Faith and kept her. For the past seven years, everyone who knows and loves Gina has got to know Faith aka Faybee (short for "Faith Baby") better than some people get to know their own dogs. Gina is a born communicator - smart, witty and capable of transforming the most mundane of Facebook updates into something exhilarating. It shines through, too, that Gina is a good soul. It has earned her hundreds of friends.

I 'met' Gina online in 2012, shortly after Faybee's mother McKenzie was diagnosed with malignant histiocytosis. Gina and I are divided physically by the Atlantic, but connected through our career choice (both journalists) and a shared fear for the future for the Flatcoated Retriever, a breed currently fighting a losing battle with cancer - mostly soft-tissue sarcomas, but a growing number of other cancers, too.

Gina fought tooth and nail to keep McKenzie by her side - until she could do no more. It was profoundly upsetting to witness both the death of such a beautiful dog and to feel Gina's grief so acutely through her writing.

Faybee's sire too died of cancer - osteosarcoma. Neither of Faybee's parents made their 8th birthday.

For the past four years, I think everyone who loves Gina has been holding their collective breath, praying that Faybee wouldn't succumb to the blight; hoping that she had landed on the right side of the Flatcoat's 50/50 odds of dying of cancer by the age of eight.

Last Friday, Gina revealed that Faybee had been under the weather for the past couple of weeks. She took her for a full work-up and a scan revealed an enlarged spleen. They operated and found masses which seemed to be contained to the spleen, which was removed. The vets told her they could be benign. Faybee bounced back from the surgery and came home to Gina on Sunday. She was in good spirits.

But on Tuesday, Gina revealed that Faybee wasn't quite as good as she had been the day before. It was at this point, I am certain, that every Flatcoat-owning friend of Gina's felt sick to the stomach.

Tonight, I logged on to Facebook to discover that Faybee is dead - rushed back to the vets in the middle of the night because she suddenly couldn't stand. The pathology report, which came though a few hours later, revealed what by then was already known: the tumours had not been benign. Hemangiosarcoma. Quick and ruthless.

A couple of weeks ago, UC Davis released an initial report regarding Flatcoat genetic diversity. It concluded that despite having very little, the breed was pretty healthy.

I was actually so disturbed by this that I wrote to Neils Pedersen at UC Davis. I know Gina was shocked too. Can you really claim that a breed with such a high cancer rate is healthy?

Healthy until dead, perhaps - and that is true enough; the flatcoat suffers from relatively few other genetic diseases and it is a fundamentally functional, dog-shaped dog.

Ad hey... we can argue, perhaps, that Fabes only suffered a very short illness and prior to that lived a life full of love and fun and happiness.

But fuck that. Fuck that to hell.

I can't read the outpouring of sympathy on Gina's timeline - the emoji broken hearts; the inevitable mentions of the rainbow bridge; the well-meaning words about Faybee being at peace or in a better place. The only better place for Faybee is with Gina. Alive. Breathing. 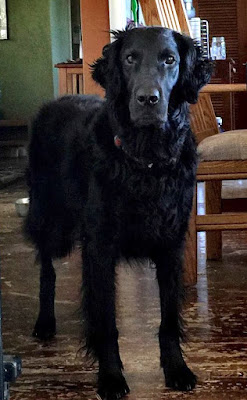 I can no longer look into the eyes of a Flatcoat and not see the cancer. A river of poison runs in their veins.  It is why there is no longer a Flatcoat by my side.  I have built a wall round my heart in an effort to protect myself - so much so that reading about the death of yet another young dog on the Flatcoat health pages barely grazes any more. But some... some... get through the defences. 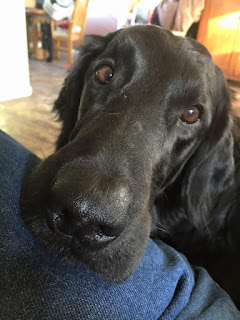 So can we please make something good come out of this? For Gina. For Faybee. For this beautiful breed.

It is not OK to predictably lose dogs at seven or eight years old (and many, many far younger).

It is not OK to accept it as just the price we pay for loving the breed, as if it's some kind of badge of honour.

It is not OK to point out that there are other breeds that die even younger or some Flatcoats that beat the odds.

It is not OK to try to deflect the blame on kibble or vaccinations or toxins in the environment.

It is not OK to throw a few quid at research and keep on breeding them the way we do - not when we know why they are dying so young and we could stop it happening.

The Flatcoat is dying because it is so genetically depleted through inbreeding that it can no longer mount a defence.