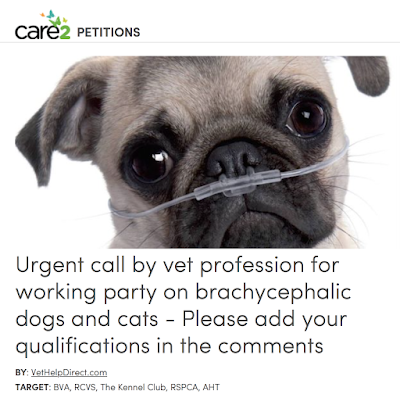 Four days ago, I published a plea for vets to put their heads above the parapet on the brachycephalic issue, arguing that as a profession they needed to do more to stop the overwhelming tide of flat-faced misery (see here).

I'm over the moon that a petition led by vet Susie Samuels of VetHelpDirect was launched yesterday calling for a working party to help tackle the problem.

Vet Pete Wedderburn has also joined in the demand for change in this blog and a strong piece in the Telegraph (see here).

"We are unequivocal in the need for all those with roles to play – including vets, breeders, breed societies, the pet-buying public as well as others – to take action to combat the health problems that brachycephalic breeds experience due to extreme conformation. "  (See full statement at foot of page here)

Some well-known names have already signed the petition. They include Harvey Locke, a past-president of the BVA; Chris Lawrence MBE, former veterinary director of Dogs Trust  now a Trustee of the Animal Welfare Foundation and Alan Rossiter, representing Veterinary Ireland, the representative body for veterinary surgeons in Ireland. On my blog four days ago, Dr Rossiter wrote powerfully:

Your anger at the current state of these poor dogs is absolutely justified. It makes me so so so angry that every pug I see coming in to me has to be referred for surgery to allow it to breath properly. It is an absolute disgrace that humans have manufactured such a situation and as vets we feel it is our job to get undone the harm humans have done in this regard.

Our general policy in the Irish veterinary profession, as represented by Veterinary Ireland, is:"The veterinary profession should strive to ensure improvement of the genetic makeup of animals so that surgical procedures are not routinely necessary to correct underlying genetic failings of a certain species or breed."

Specific to pugs Veterinary Ireland has set a goal that within a decade all pugs that are born will be able to breathe without needing surgery. We are working with the Irish SPCA and Dogs Trust Ireland on this. When I lectured on this at our last National Animal Welfare Conference (using photos like yours) our Minister for Agriculture (who was in attendance) voiced his agreement with and support for our position.

We obviously have to help the ones that come in that cannot breathe - if they need surgery then we have to do it - but we should tell breeders in no uncertain terms that these dogs must not be bred from and that they must not tolerate a situation whereby all of their 'produce' cannot beathe. We also have to make the Kennel Clubs change the breed standards and finally we have to tell the public that they should only buy pugs from breeders that have signed up to the new standards. The breeders and Kennel Club will not like this but frankly we don't care. If they don't come along of their own volition then they are just wrong and will be made come along.

The last such goal we set was to ban tail docking and to have all cosmetic procedures on animals made illegal and we won. We will win this now.

The petition has attracted over 500 signatories and many moving comments in its first 24hrs hours, from vets, vet nurses and other veterinary professionals from the UK and abroad.

You can find the petition here (NB it is only for veterinary professionals and please make sure to include your qualifications/credentials when you sign to ensure your signature is counted).\

We, the undersigned veterinary professionals, call for urgent action to address the increasing number of health problems that we are seeing in our vet clinics as a consequence of the rapid increase in the number of brachycephalic dogs and cats being bred and sold in the UK. As vets we of course provide treatment to affected animals, to relieve their suffering and to improve the quality of life of the individual, but we would far prefer that these health issues did not occur.

Brachycephaly is a man-made conformational disorder that impacts negatively on many body systems: respiratory, reproductive, thermoregulatory, neurological, ocular and orofacial. The consequences of the condition are often life-limiting and treating affected animals has become a growing part of every small-animal vet’s workload.

Despite the evident appeal of short-nosed pets to many of our clients, it is our duty as vets to not just treat these animals, but also to lobby for reform in the way they are bred – in particular the “extreme” brachycephalics such as Pugs, Bulldogs, French Bulldogs and flat-faced Persian cats.

The Advisory Council on the Welfare Issues of Dog Breeding issued recommendations in their 2012 report, under a section titled "Breathing difficulty linked to head conformation" but veterinary clinics across the UK continue to see many patients suffering from problem linked to extreme brachycephaly. We are calling for urgent action to be taken now to deal with the consequential animal suffering.

We propose that a working party is established with the aim of coming up with concrete proposals to tackle the issues – measures which may include reform of the breed standards to introduce minimum muzzle lengths, functional tests before brachycephalic dogs can be bred and increased efforts as a profession to educate the consumer of the welfare consequences of their puppy-buying choices.