Last night, BBC Panorama aired a gruesome exposé of a northern Ireland puppy farmer called Eric Hale. (If you are in the UK, you can watch the whole programme on iPlayer here.)

But it was also an an exposé of the Kennel Club's continued registration of puppy farm dogs.

Despite repeated urging by the Kennel Club to prospective puppy-buyers to avoid puppy-farmed dogs, the organisation continues to register dogs bred by breeders such as Eric Hale.

Hale is a show-breeder of Beagles - and before that Bearded Collies -  registering the Beagles under his Southistle affix.  He has registered at least 20 litters of Beagles with the Kennel Club - the last that I can find in August 2015, although this litter, from January 2016, was advertised on DoneDeal as also being KC-registered. 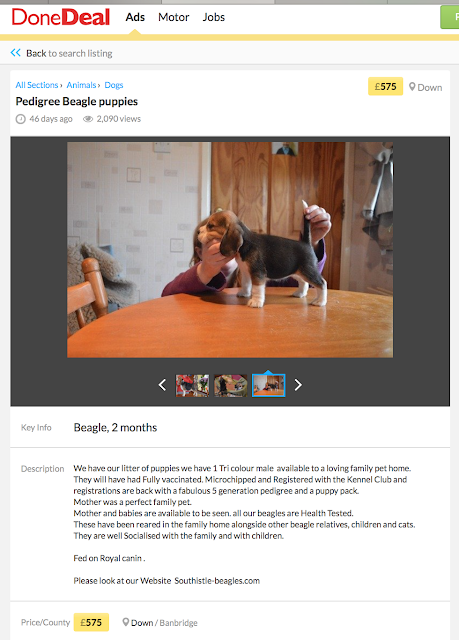 Clearly, Mr Hale is also breeding a whole heap of other dogs, as last night's programme revealed. The conditions looked grim - with little bedding and the dogs on sawdust. The programme claimed that the dogs did not routinely get access to the outside.

In its position statement on puppy farming, the KC states:


"Breeders who breed five or more litters a year normally require a breeding licence from their local authority, and in order to continue registering puppies with the Kennel Club, anyone seeking to register five or more litters in a single year is asked to provide a copy of their licence. The Kennel Club will also be entitled to ask for a licence from those individuals who collectively register more than five litters a year from a single address."

So, presumably, the KC has asked Mr Hale for a copy of his breeding license, and this will have shown how many dogs he is licensed to keep.

Here's the public record from 2012 - which shows that Mr and Mrs Hale are licensed to keep over 100 breeding bitches. 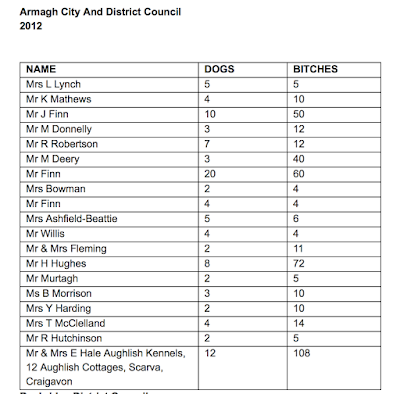 The Kennel Club often points out that not all volume breeders are puppy-farmers - citing Guide Dogs for the Blind as a large-scale breeder that is "responsible and caring".  But, of course, this exception does not prove the rule. Assistance dog charities or police-dog breeding programmes may mostly do a good job but, in practice, no volume breeder meets the needs of a really large number of breeding bitches unless they are in the public glare or are blessed with wad of cash from either charity donations or the public purse.

The KC also maintains that "only two per cent [of breeders who register their dogs with the KC] breed more than five litters per annum".

This is a weaselly statistic - it may be only 2 per cent of breeders, but it will be a higher percentage of actual puppies - so it is at least several-thousand puppies a year. (KC registrations per annum are about 225k.)

However, if there are really so few volume breeders registering their dogs with the Kennel Club, how about the KC commits to inspecting any breeder that is licensed for more than, say, 10 breeding bitches - regardless of whether they have been inspected by their local authority (we know this task is often delegated to people who either don't care much or who don't have a clue)?  If the numbers really are so small, surely it is not going to be a huge toll on resources?

The KC constantly maintains that it is obliged to register any dog on its general register, as long as it meets some minimum requirements. Those requirements do not include the conditions in which the pups have been bred.

Quite frankly, the registration of puppy-farm dogs remains a blot on the KC landscape and it needs to be addressed - to ease both our souls and the KC's reputation.

I have asked the KC for input regarding the continued registration of Mr Hale's puppies and will add here if I get it.

Posted by Jemima Harrison at 16:35