This video has had over two million views on Facebook with a whole heap of unthinking "so CUTE!!!" comments.

Here's what happened when someone tried to raise awareness of this dog's breathing issues. 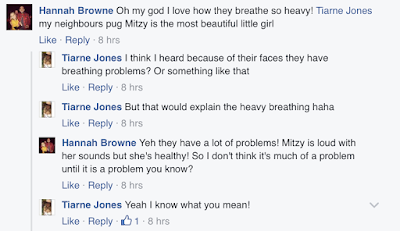 One person has provided this link to a website which advises on Pug's breathing problems. There is some good info there, but it includes this attempt to normalise noisy breathing and pinched nostrils.


The Pug dog will have breathing issues that are considered "normal". Although they may be quite alarming to new, unsuspecting owners, the following are common traits that are to be expected:

Snoring - Many Pugs snore when napping and sleeping through the night. This is not usually indicative of a serious health issue. If it does become excessive, stenotic nares and/or elogated palate may be the cause.


Snorting noises - It it typical for a Pug to make noises like grunting and snorting. This breed will wheeze and gasp a bit. As we look ahead into the details of Pug breathing problems, this will only need to be addressed if it appear to interfere with normal respiratory functions.


This is not uncommon with brachycephalic, short-nosed dogs. This is a physical condition in which the dog's nostril are too narrow to allow for proper breathing.


This is also referred to as pinched nostrils. It is a congenital trait, which means that it is passed down genetically, however it cannot be bred out of the Pug due to facial structure that gives the Pug his unique appearance.

Posted by Jemima Harrison at 09:34