The Dalmatian Clubs in the UK have blocked an attempt to have the results of a key DNA test for the breed listed on Dalmatian pedigrees.

Four years ago, despite breed club opposition, the Kennel Club agreed to recognise LUA Dalmatians (those dogs that had at least one copy of a gene that ensures the normal production of uric acid). A year later, the AKC followed suit. It was a real victory for common sense.

The problem? 'Regular' Dalmatians don't have a normal copy of a gene that controls the production of uric acid. They only have a version that results in high uric levels which makes them very vulnerable to blockages/stones in the kidneys/urinary tract. These blockages can be painful and, at worst, life threatening.

The normal version of the gene (which exists in all other breeds) had been lost in Dalmatians somewhere along the line. But, in the late 1970s, American scientist and Dalmatian breeder Bob Schaible did an outcross to an English Pointer to restore the normal version of the gene to the breed. The LUA Dalmatians are descendants of this single outcross some 14/15 generations ago. Today, they are identical to any other Dalmatian, just blessed with a gene that prevents suffering from a significant problem in the rest of the breed.

But despite Kennel Club registration, and a growing acceptance within some in the breed, there is a diehard core of resistance in the upper echelons of the Dalmatian breed clubs. There are four in the UK and not a single one mentions the LUA Dalmatians on its website. There is also, very disappointingly, still mutterings ringside about 'mongrels' when LUA Dals enter the show-ring.

Recently,  LUA breeders Julie Evans and Dr Elizabeth Sampson wrote to to the Kennel Club to request that the uric acid status of the LUA Dalmatians be recorded on pedigrees.

The KC replied to say that for this to happen:

The first was a no-brainer. Litters from LUA parents can result in a mix of LUA and 'regular' pups, so LUA breeders always DNA test their pups to determine which ones carry the LUA gene - vital to ensure the onward survival of the gene in the breed.

So Evans and Sampson wrote to the Joint Dalmatian Clubs to ask for their agreement. 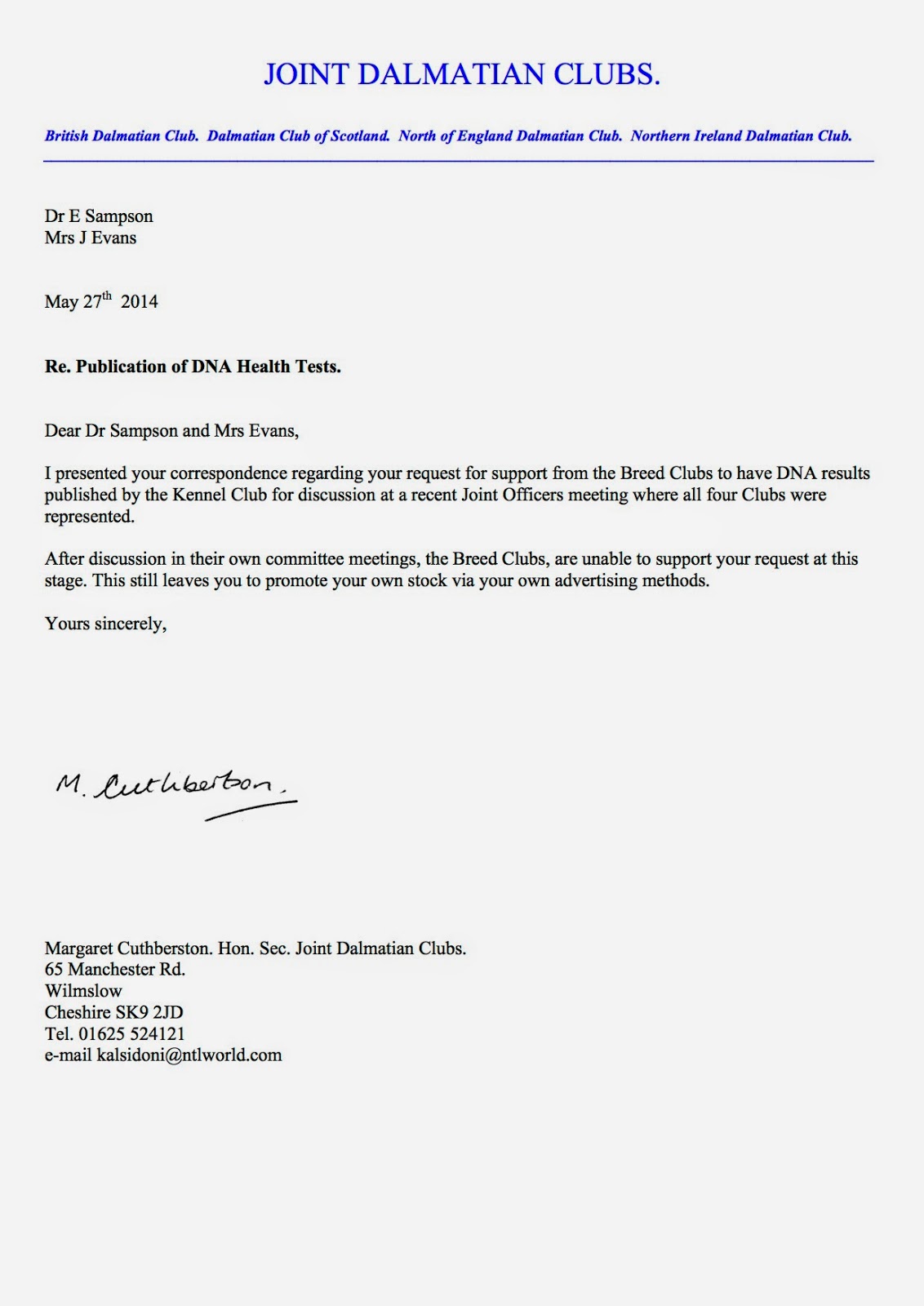 As you can see, it is an unequivocal no - plus they very rudely suggested that the LUA breeders find an alternative way to flog their pups.

But, of course, in doing so, it's clear that the Dalnosaurs know that LUA Dalmatians are more marketable.

Evans, Sampson and the other LUA Dal breeders all have waitings lists for their pups because the public, at least, recognise that they are healthier dogs.

For here's a thing: it isn't just that the LUA Dals don't form stones. There is a lower rate of deafness in the LUA dogs than in the rest of the breed - most likely because LUA Dal breeders will only breed from bilaterally hearing dogs with brown, not blue, eyes.

How about that?
Posted by Jemima Harrison at 21:10