In today's most depressing dog news, the Royal Veterinary College announces it is to open a special clinic for brachycephalic dogs - like this Pug above who, despite being desperate to sleep, is standing in an effort to keep his head up and his airways open.

This of course, is considered "cute" in Pugland (and beyond) where those that breed, buy, register  and purport to love brachycephalic dogs remain stubbornly impervious to the suffering.


"This type of breed is one of the most popular pet choices in the UK, but the breeding of brachycephalic dogs has lead to a variety of health issues for the animals. These include problems with their bones and gait as well as eye, heart, ear (including hearing), skin, and breathing complications.

"Brachycephalic dogs have a compressed skull in the front and in the back, which results in the soft tissues being crammed within and around the skull. In severe cases it can even appear the dog has no nose at all.

"This means the animals are at especially high risk of developing respiratory problems such as brachycephalic obstructive airway syndrome (BOAS). The clinical signs include breathing difficulties, noises during respiration, ‘constant smiling’, overheating, gagging and choking.

"But it isn’t just a dog’s breathing that is severely affected by the condition. The short skull also results in the dog’s skin folding over the front of the face, creating deep crevices which are a warm and moist environment that encourages growth of bacteria and yeasts. These bacteria can then attack the skin causing infection.

"The flattening of the skull also causes the eye sockets to become shallow, meaning the eyeball protrudes significantly. Therefore the cornea is more exposed than usual, making it more likely to become dry, leading to ulceration or direct trauma. Other health issues can include heart problems, ear and hearing issues and complications with the animal’s bones and gait.

They should have added dental issues to the list too - this picture shows the internal consequence of breeding for a flat face: teeth overcrowding/misalignment that often results in painful infections. 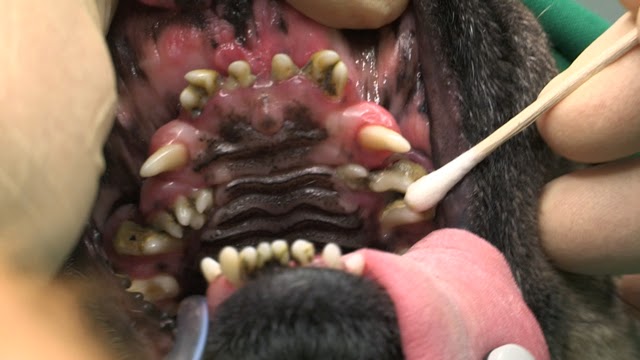 But, of course, despite the litany of life-impairing health problems suffered by  Pugs, Bulldogs, French Bulldogs, Pekes and others, nobody is doing a blind thing to stop it.

And let's be blunt here - these dogs' suffering is a marketing and income-flow opportunity for the veterinary profession.

I suggest if the RVC wants to feel good about this that it also needs to be issuing a  really strong statement saying that breeding dogs this defective is morally and ethically unsupportable.

Almost all vets will admit this privately.

Unfortunately,  neutering/de-barking has always been part and parcel of veterinary training.

The new RVC clinic for brachycephalic dogs opens its doors on July 1st.

PS: The video at the top is from this site.. scroll down to have a look at the comments...
Posted by Jemima Harrison at 13:12