In 2004, the Kennel Club launched its Accredited Breeder Scheme, promising a quality assurance scheme that would take the guesswork out of buying a happy, healthy puppy.

The Scheme - now the Assured Breeder Scheme - has been plagued by stories of accredited status being given to puppy farmers... of health-test demands being inadequate... of setting the bar so low that the crappiest breeder can join.

But over and over again in the past 10 years, the Kennel Club has reassured us that it's doing all it can to ensure the integrity of the Scheme -  via laying down minimum standards, checking breeder records - and, critically, through physical inspections done by a network of regional breed assessors.

And although the suspicion has always been that the KC is accrediting a huge number of breeders without inspecting them, it's been hard to check as the KC hasn't released detailed information.

In 2011, the KC assured me that "it is their intention to inspect every new breeder at the point of entry to the scheme". They said the same to me a week ago. Every impression has been given that it is well on the way to achieving this - but no way of checking because inspection data has not been made public.

In January 2013, though, the scheme became accredited by UKAS and UKAS  demanded that the KC lists its breeder inspections. So it is now possible to check.

And a Pedigree Dogs Exposed audit of the scheme reveals the shocking truth.

According to the information available on the KC website:

• hundreds of puppies are currently being advertised on the KC Puppy Finder, bred by breeders awarded the "Accredited" stamp who have never been inspected.

• 90% of the new ABS breeders who have previously registered 5 or more litters with the Kennel Club have not been inspected (this despite KC assurances that volume breeders are a priority).

Here is our audit for the Top 20 breeds  - which comprise about half of all ABS breeders. 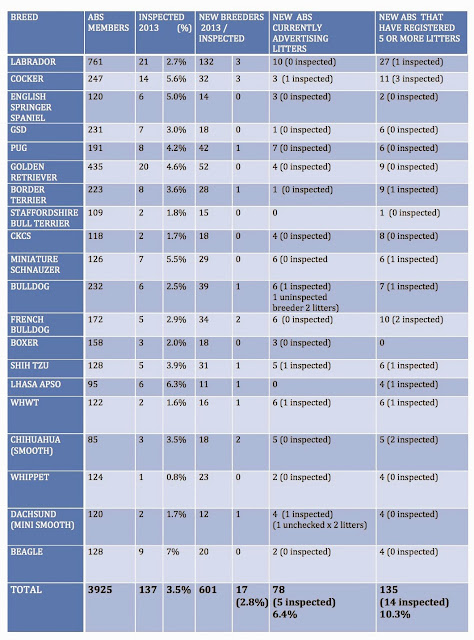 Our audit for every KC breed is available on request - please email jem[at]pedigreedogsexposed.com

The KC's Bill Lambert maintains that they will have done 800 inspections this year by Christmas. He also says that there can be 200-300 in process at any one time and that breeders are given up to 60 days to provide all the paperwork/make improvements.

From that we can assume that the 287 inspections listed on the KC website are correct for the first three quarters of 2013.

Even if we are generous and assume that there are 300 inspections in process (although that is way over the pro rata rate), it still doesn't get anywhere near the 800 inspections claimed.

(I have asked the KC for an explanation and will add/edit when I get it.)

So where does this leave the Kennel Club?

Many thanks to Nicola, Georgina, Corina and Hermina for their help in compiling these figures.

Posted by Jemima Harrison at 13:04