There's something odd that happens if you're around abnormality for long enough. You start to become desensitised to how grossly abnormal it is.

This is why the alarm about the severe morphological problems in some pedigree dogs took so long to register; why Bulldog breeders look at you in astonishment when you challenge the wisdom of breeding an animal that fails on so many basic functions (breathing and running freely, mating, whelping).

I am not immune to this process myself. I was ringside at the Bulldogs yesterday and they're beginning to look a bit less abnormal to me, too.

Now this is partly because they are a little better than they used to be. They are a little taller on the leg; there are some marginally more fluid movers (particularly the bitches which are smaller and lighter); some better breathers, too.

But let's not pretend that Bulldogs are anything other than a gross parody of what a dog should be - and it becomes painfully obvious when you photograph them.

The Bulldogs and most of the brachycephalic breeds were shown in Hall 4 at Crufts yesterday. It was markedly cooler than the other Halls - by design of course. The Bulldog ring was, as ever, deliberately positioned by a door kept open to aid the flow of cool air.

It was by no means warm, but not a single Bulldog that I saw in the hour or so I spent there could trot up and down in the ring yesterday without panting.

Here's the Bulldog bitch that went Best of Breed at Crufts yesterday. 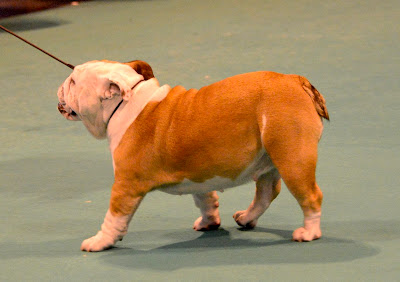 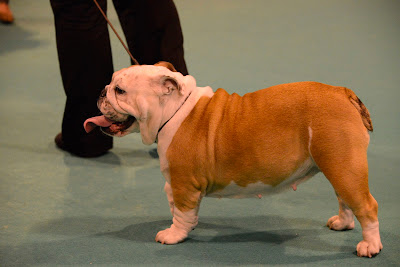 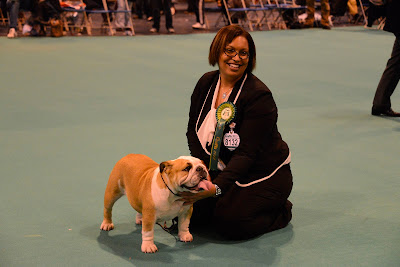 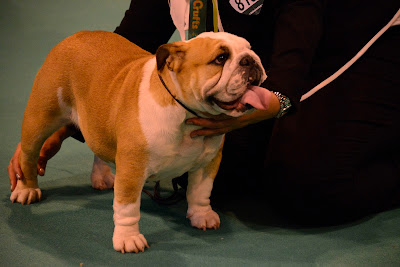 This 19-month-old bitch was better than some - but is still breathing quite heavily in these pictures, several minutes after a brief trot round a cool ring.  Later in the group in the bigger Arena, where she had to trot a few metres further, she was quite obviously breathing heavily, too.

But she passed the vet check. So how come?

It's partly because the vet check isn't very taxing... the vets are not allowed to use any instruments; not even a stethescope.

And it's partly because of the normalising process I mention above.

The veterinary team at Crufts this year is headed by Andreas Schemel - a pug breeder and judge whose views on the breathing problems in flat-faced dogs are at odds with experts in the field. Contrary to most expert veterinary opinion, he insists that it is narrow nostrils, rather than the short muzzle, that is the main cause of the high prevalance of bracycephalic airway syndrome in Bulldogs, Boston Terriers, French Bulldogs, Pugs and Pekes. Schemel even opined recently that the "the presumption that a long nose is automatically healthier than a short one grossly simplifies the situation and still has to be proven."

Schemel believes that breeding for wider nares is the solution... ergo - da-daa-  you can keep the flat face. It's bollocks, of course.

Yesterday, Schemel either did or oversaw the vet check on at least one of the brachycephalic breeds as he was in the vet-check booth with them. They all passed.

The other vets doing the vet checks are now under the KC's wing, too. They've been brought into the fold; introduced to breeders and attended Kennel Club health seminars - including a High Profile Breeds Education Day last month "showcasing the health work that has been undertaken by breeders and the progress that has been made."

I am sure they are all great vets, but immune to this kind of indoctrination? Of course not. They become desensitised - as described in 1997 in the Canadian Veterinary Journal by vet, Korarik Arman. In an article entitled A new direction for kennel club regulations and breed standards Arman wrote:

"The high frequency of genetic disease that has developed in purebred dogs over the last century has resulted in the desensitization of society and veterinarians to the resultant welfare issues to such an extent that the production of anatomically deformed dogs, such as pugs and daschunds, is neither shocking nor considered abnormal.

So vets start to think: "this breathing, this movement... hey, it's pretty good for a Bulldog" whereas what they must continue to ask is: is it good for a dog...

Of course the breeders are happy. They have always whinged that the vets don't understand that Bulldogs, Bassets and the like are supposed to be like that.

The Bulldog judge yesterday was asked if she was seeing less extreme dogs coming through the ring now. Her reply? She never thought they were extreme.

I applaud the Kennel Club for introducing the vet checks. They have worked. The Best of Breed Basset and Bloodhound and Shar-pei at this year's Crufts are all more moderate dogs. But there must be no resting on laurels and the checks must  not be watered down.

Because, after all, where do we go from here? Given that the vast majority of Bulldogs are now passing the vet checks done by vets who are no longer as objective as they should be, are these oxygen-starved, shambling creatures with grossly undershot jaws and tongues too big for their mouths really as good as it gets?  See Bulldogs @ Crufts 2013 - Part 2 and decide for yourself.

Posted by Jemima Harrison at 12:04