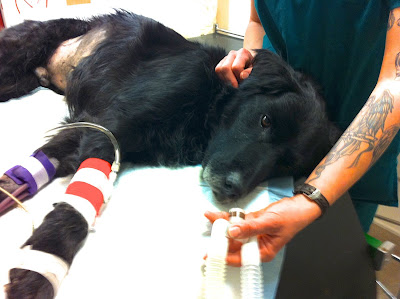 This is my own boy, Boz, who suffered a GDV last week - a gastric dilatation volvolus, colloquially known as bloat.

The picture was taken at 3am a week last Tuesday as the emergency vets worked to stabilise him before surgery.  When I took it I didn't know if Boz would live or die. He was in cardio-vascular shock caused by his stomach twisting and cutting off the blood supply back to his heart.

Bloat kills in hours and it is a horrible, agonising death. Because Boz was at the foot of my bed I heard him unable to settle and begin to moan in pain. He did not show the hallmark symptom of either unproductive or "thready" retching, but he couldn't get comfortable and his abdomen was tight as a drum. When I listened to his tummy, it was completely silent. A telltale sign.

At 1am, I put Boz in the car and drove to the emergency vets 12 miles away.

So we caught it early and the surgery was reasonably uneventful. When they untwisted Boz's stomach (and tacked it so it can't twist again) the constricted tissues perfused with blood again. A little longer and the tissue would have died, become necrotic, necessitating more extensive - and riskier - surgery. As it was, the only small complication was that he vomited when coming round from the anaesthetic and inhaled some of it, resulting in aspiration pneumonia. He needed supplemental oxygen for 24 hours and antibiotics for a week. But he is now back to his old self: my beautiful, and much loved, boy... all the more precious for his brush with death.

So WHY did Boz bloat?

• It might have been the large meal he'd eaten quite late that night. That's thought to be a cause.

• It might have been that he is male  - and slightly underweight.

• It might have been because he wolfs his food (bolting food is another suspected cause).

• It might have been his basic conformation - Boz is a large dog with quite a deep chest; a known risk factor.

• It might have been that one of his parents was a retriever, a breed prone to bloat. (Although his other parent was a farm collie, much less susceptible.)

• It might have been his age - the risk of bloat increases with age. Boz is now 8 years old.

• It might have been that he is quite a "stressy" boy - some studies have suggested anxious dogs are more likely to bloat.

• I know it wasn't because he is fed with a raised feeding bowl - another reported risk factor - because Boz's bowl is firmly on the ground.

• I know it wasn't because he's fed just dry food, because like all my dogs he is fed a mix of kibble, tinned meat, fresh chicken and various leftovers.

• And I'll never know if it was because he had a first-degree relative that had bloated (one of the key risk factors) because I don't know who they are.  Boz is a rescue crossbreed.


So  I don't know for sure. And that's in part because there has been surprisingly little research into the causes of GDV/bloat, despite it being a huge killer of dogs, especially in the highest-risk breeds. Without veterinary treatment, it is 95 per cent fatal. Even with veterinary treatment, not every dog survives.

According to the Kennel Club/BSAVA 2004 health survey, GDV was a cause of morbidity in 44 breeds, and a cause of death in 65 breeds. It found that GDV hit one in four Grand Blue de Gascoigne, almost 15 per cent of Bloodhounds, almost 10 per cent of Otterhounds and 7.2 per cent of Irish Setters. Great Danes, German Shepherds and Standard Poodles are other high-risk breeds.

So it's great to hear of new research initiatives on both sides of the Atlantic that will hopefully result in equipping breeders and owners with new strategies to help mitigate the risk.

In the USA, the AKC Health Foundation is offering grants totalling £250,000 (raised through the breed clubs) to researchers - details here and here.

And in the UK, there's an exciting new collaboration between the Animal Health Trust, the Kennel Club and the Irish Setter Clubs.

It involves the KC mailing the owners of every KC registered Irish Setter (~11,000) to ask if their dog has ever suffered bloat and ask them to fill in a comprehensive questionnaire with questions about health, temperament, exercise and feeding regimens and so on.

"We are also going to ask owners to take some simple body measurements, to see if there is a correlation between any of them and an increased risk of bloat," explains Cathryn Mellersh at the Animal Health Trust.  "I’m doing this with Tom Lewis, who will estimate the heritablity of bloat, which will tell us how much of the risk is due to genes versus the environment.  As far as I am aware heritabiity has never been investigated before, but as this will hopefully be a large dataset Tom should be able to estimate it with a reasonable degree of accuracy."

This is a fantastic use of the KC database and genuinely exciting. Well done, too, to the IS Clubs for raising the £12,000 needed to help make it happen.

In the meantime, please make yourself aware of the symptoms of bloat. It is a genuine emergency and acting quickly can save your dog's life.

This video shows an Akita in fairly advanced stages of bloat. The dog was being filmed by his new owners, who had no idea what was going on. Fortunately, they got him to a vet in time and he survived. NB: it is distressing to watch.

Posted by Jemima Harrison at 22:20