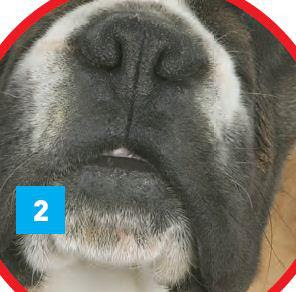 Royal Canin have this pic up on their Facebook wall today (link here). It's a "fun" post asking people to guess the breed.

One day, I hope that when the folk at Royal Canin see a photo like they will wince and choose one of a dog with wider nostrils instead - you know, a dog that might have a fighting chance of being able to cool itself through wide-open pipes when the British summer actually arrives.

But then this is the pet food manufacturer that profits from the problems we've bred in to pedigree dogs and cats. It makes, for instance, special-shaped kibble for brachycephalics with the blurb for their pug-specific kibble saying:

"The Pug is a perfect example of the “brachycephalic” jaw type with a very short muzzle. The size, shape and texture of PUG 25 kibbles are specially designed to make it easier for your Pug to pick up and encourage him to chew."

I hate this kind of normalisation of a defective design, although I guess sales might be dented if instead the pack read: "There's something horribly wrong with breeding dogs that can't eat normal dog food. For God's sake, next time choose a dog with a muzzle!"

A while back, when we were working on the promo for Pedigree Cats Exposed, I asked Royal Canin for a packshot of their "specially-designed" food for extreme Persians (have a google - they're worse, even, than the shortest-faced Peke or Pug).

I guess I shouldn't have been surprised that it was refused.

If you also feel that Royal Canin should not be using physically-compromised dogs like the Boxer in the pic above for a bit of "fun", please drop them a gentle comment to that effect here.

Update 14/6: Thank you to all those who contacted Royal Canin to raise the issue. After initially defending the choice of picture with the claim that the stenotic nares above were normal and just part of the natural variance seen in different dog breeds (see comments below), they have now removed the image and the thread from their Facebook wall.


Finally, here's part of an email I received from boxer breeder Dr Bruce Cattanach in response to the blog which I reproduce here with his permission:

I was also fairly ignorant re nostrils at one point, and then I got a dog of my own with pinched nostrils.  I had him operated to resolve the problem, my vet getting help from a Pug vet.  The difference to the dog was unbelievable within hours. I thought my dog with pinched nostrils was actually fine and healthy but I could not believe the immediate difference in the dog when the nares were opened up.  Livelier, bouncier and definitely happier.  In retrospect, one could say he was dampened down and even depressed before the operation but I certainly didn’t recognise this.  He had seemed fine.

Posted by Jemima Harrison at 14:31