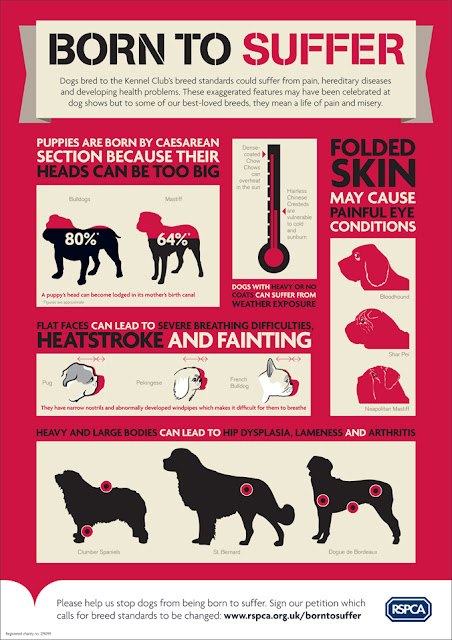 In cautiously-optimistic mood about the future of dogs on my return from Stockholm and the 1st Dog Genetic Health Workshop last weekend (report to come shortly, I promise!) I have to confess to gulping slightly when I saw the latest poster - or infographic as they're calling it - from the RSPCA.

This is a very strong, clear graphic with a simple message and a single point of action: sign the RSPCA petition to call for breed standards to be changed.

The reason I winced slightly is because I believe that Kennel Clubs and breeders are beginning to get the message and, from their point of view, it will only increase the chasm between them and the RSPCA at a time when there is momentum to build bridges rather than blow them to smithereens.

But, of course, this poster is primarily aimed at the dog-buying public who are still buying freakish dogs in their thousands. And they do still need to be told that too big, too flat, too wrinkled and too-out-of-proportion causes suffering, and not least because if they start demanding a more moderate dog, it will be a very powerful lever for change across the board. As I believe that this is what reforming Kennel Clubs and good breeders want too, I'd ask them to take this one on the chin.

The breed standards do still need to be changed - as called for recently by the British Veterinary Association's Harvey Locke recently  (download link to Vet Record editorial). As was discussed in Stockholm,  breed standards in the main do not demand exaggeration, but they do in some instances still detail physiological traits that have the potential for harm (eg a lozenge-shaped eye or a double-twist in a tail). There is a lot of potential for breed standards to act as a moderating force eg in ensuring an upper weight limit in giant breeds (or even reducing the current weights/sizes), or demanding a minumum. measurable muzzle length in the brachycephalics.

So I'd urge everyone to sign the RSPCA's petition for a further revision of the breed standards. You can do that here.

NB: the wording on this link is a little nebulous, but I've checked with the RSPCA today and they have reassured that your signature here is a signature specifically (and solely) for this single petition - to call for further changes to the breed standards. They also revealed that 16,000 people have signed it so far.
Posted by Jemima Harrison at 11:07