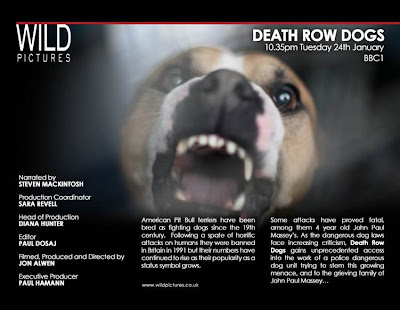 There was a lot of hot air on the dog fora in the lead-up to last night's BBC1 documentary on dangerous dogs... with the anticipation that the film would take the tabloid route re Pit Bulls.

"Death Row Dogs" was much-trailed as featuring the family of 4-yr-old John-Paul Massey who was killed by his uncle's Pit Bull in November 2009. Yesterday morning, the boy's mum, Angela McGlynn, appeared on breakfast TV calling for all Pit Bulls (and types) to be muzzled at all times, in and out of the home.

The fear in the dog community - which as a whole argues that the Dangerous Dogs Act needs to be re-written to punish the "deed not the breed" - was that dogs would once again be demonised in this film. Fueling this were reports that a contribution by "dog-lawyer" Trevor Cooper (who defends Pit Bulls in court) had been dropped by the programme.

Lots, then, put two and two together and came up with "Another Sensationalised, Biased BBC Film!"

But as soon as I saw who had edited the film, I knew it wouldn't be anything of the sort. I have known Paul Dosaj for some years (indeed, I have to thank him for introducing my partner, Jon, to me 15 years ago). Paul is a multi-award-winning editor who never takes the obvious route  and always delivers careful, thought-provoking films.

And, in truth, it turned out to be a truly beautifully-made, non-judgemental film that featured a lot of victims, two-legged and four, and only one real baddie - the law.  The dangerous dogs police unit was headed by an officer who clearly loves dogs and was good at reading their body language. It was a tribute to both him and the dogs that he was able to approach most in full police garb without any fear of being attacked. (But then as he said, 9 out of 10 were not people aggressive.) "He's just scared" he said at one point as one dog twisted and turned on a grab pole. Others would have seen it differently.

The film didn't need Trevor Cooper speaking up for the dogs. The film-makers did it for him while also allowing a nuanced insight into John-Paul Massey's families. I thought his grandmother Helen Foulkes,, who was with the boy when the attack happened, spoke particularly well.

The saddest moment in the film came when we saw a beautiful young dog being put to sleep for just looking a dangerous dog, the innocent victim of a law in urgent need of reform. The dog, heavily sedated from a massive dose of barbituares, was placed on the floor with the camera in front of him looking right into the dog's open eyes as the lethal injection was administered.  You saw the light leave him. It was profoundly moving.

If you're in the UK, you can catch the film on BBC iPlayer for the next seven days.
Posted by Jemima Harrison at 09:47