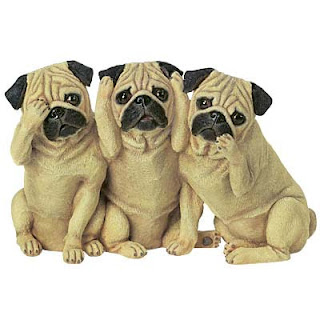 There's a depressing comment by Ceksy Terrier breeder Sheila Atter in an exchange of comments in response to her Dog World column this week.

"In my breed there are no required tests, eye testing is 'recommended'," she writes. "Personally, I heart, eye and patella test. Almost every other Cesky Terrier breeder (except one in the US) thinks that I am not merely completely barmy, but doing the breed a grave mis-service as any mention of health-testing will apparently convince the general public that we have problems in our breed. None seem to be able to understand the argument that health testing actually proves something about the health status of my dogs. I was even 'ordered' at the last AGM not to mention health problems in my DW breed notes as this was 'harming the breed' "

I can't tell you how many times I've heard similar things said in other breeds and it makes my heart sink. But well done for Sheila for being brave enough to say this.

Here's a little PR advice to breed clubs that take this stance: it doesn't work because it doesn't fool anyone.  I spend quite a lot of time trawling breed club websites and it's the ones that are most open and honest about health problems that are the most reassuring (with one or two exceptions). We don't want to hear health problems minimised. We want them acknowledged and we want to know what it is being done about them - and how we can help. To see how some other clubs are doing, check out the Karlton Index  - which, for instance, praises the Dachshund Breed Council for its proactive stance on health.

Worth a revisit is Omerta: The Breeders' Code of Silence written by Sierra Milton in 2004, way before Pedigree Dogs Exposed. I don't agree with everything in this article (Jerry Bell's views about outbreeding do not tally with those of many population geneticists for instance), but Milton's heartfelt plea to break the silence is strong and pertinent.

"We can break the silence by commending those with the courage and determination to talk about problems, share successes and knowledge instead of ostracizing them. Omerta fails if every puppy buyer and stud dog user demands that proof of genetic testing is shown. The Code of Silence fails when we realize that it is not enough to breed winning dogs or to command the highest price for puppies or to have a stud dog that is used fifty, sixty, a hundred times; we must take back the passion with which we all first embraced our breeds and passionately work with determination toward a future where the numbers of genetic disorders are reduced each year."

"It is hard work and takes great courage to develop a breeding program using scientific methods and tests, but the hope of a better future should drive us all to that very commitment. The key is being able to work together without fear of whispers or silence. Omerta, the code of silence, can be broken if more of us decide that we are not going to tolerate the quiet any longer."

Posted by Jemima Harrison at 23:25