The Kennel Club yesterday released a new Code of Conduct for those that show (don't hit the judge; don't let your dog eat anyone else's, that kind of thing) and it includes a section offering guidance to those using "social media such as Facebook". The KC warns: "Be sure that what you post today will not come back to haunt you."

Think Before You Post
There’s no such thing as a “private” social media site. Search engines can turn up posts and pictures years after the publication date. Comments can be forwarded or copied. Archival systems save information even if you delete a post. If you feel angry or passionate about a subject, it’s wise to delay posting until you are calm and clear-headed.

Be Accurate
Make sure that you have all the facts before you post. It’s better to verify information with a source first than to have to post a correction or retraction later.

Correct Mistakes
If you make a mistake, admit it. Be upfront and be quick with your correction. If you’re posting to a blog, you may choose to modify an earlier post—just make it clear that you have done so.

The timing is interesting given the problems (which I've blogged about here and here) with a high-profile Facebook site, run by poodle breeder Mike Davidsohn, aimed at stopping the update to Pedigree Dogs Exposed being made.

The site disappeared a few days ago - apparently due to a technical glitch -  but has now popped up again under a slightly different name.  No problem with that, of course, as long as they campaign fair and square. But despite claims to being new and reformed, within a couple of days they had yet again started on the personal attacks - this time targeting Dog's Today editor, Beverley Cuddy, after Davidsohn found out that she had been asked to judge at a charity dog show at the weekend. Bev's crime? She employs me as a columnist and three years ago she appeared in PDE calling time on the health problems in pedigree dogs

Davidsohn, who admits to going into newsagents and re-arranging the dog magazines so Dogs Today can't be seen (and, amazingly, he's 55, not five), was so incensed that he decided to try to subvert the dog show - and also use the opportunity to have yet another pop at Beverley's inspired Don't Cook Your Dog Campaign. This has gone from strength to strength in the past couple of weeks, with support from just about everyone in the dog world - bar Davidsohn and his supporters who just can't bring themselves to put the dogs over and above their personal grievances.

Here are a few posts from the resulting discussion. 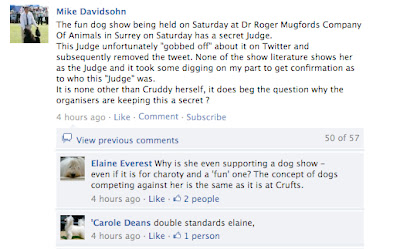 Then, finally, a voice of reason...

It falls on deaf ears.. 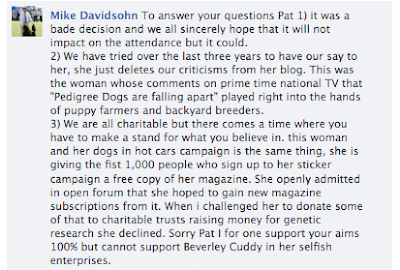 There's been a mixed reaction on the site to the KC's new Code of Conduct. Davidsohn was quick to point out that they are guidelines only and that "it is not in their remit to govern what we say and do on the Internet" but others have, sensibly and strongly, pleaded for the bitching to stop. The problem, of course, is that all the good intentions seem to last for about two seconds.  But then, as another poster points out:

Posted by Jemima Harrison at 01:23