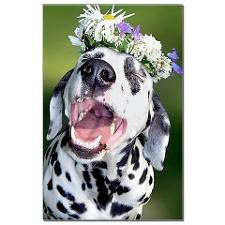 The very best news from the US came in overnight.... The Dalmatian Club of America has voted 305 to 253 against to accept the low-uric acid (LUA) Dalmatians, paving the way for AKC registration.  It is a victory for common sense, science and of course for the breed itself, as the dogs are identical to any other Dalmatian but do not suffer from one of the breed's biggest health problems - the build-up of crystals/sediment in the urinary tract caused by the high uric-acid levels that are ubiquitous in the breed due to a genetic defect.

Dalmatians have a double-dose of this faulty gene, making it impossible to breed away from the problem within the breed. So in the 1970s, scientist and Dalmatian breeder Bob Schaible did the unthinkable (well to some dog breeders at least): he crossed a Dalmatian with a Pointer to bring in a normal version of the gene that codes for uric acid metabolism.

The progeny of that first breeding produced pups without the defect. They didn't look much like Dalmatians but today, after 14 generations of breeding back only to purebred Dalmatians, the dogs are indistinguishable from their high-uric-acid cousins - hardly surprising given that the normal gene is just about the only thing that remains of the original Pointer.

But Schaible and other proponents of what became known as the Backcross Project  or Dalmatian Heritage Project counted without the breed purists at the Dalmatian Club of America who have essentially blocked the AKC registration of the LUA Dals for more than 20 years. Hell, the Club even banned discussion of the dogs because the subject was considered so controversial.

The wall of resistance has crumbled due to several factors:

First and foremost, there has been the incredible determination of those who believed in the LUA Dals and refused to give up the fight.

Then there was last-year's decision by the Kennel Club in the UK to allow the registration of Fiona, a LUA Dal (and more since) - despite strong opposition by the Brtish Dalmatian Club.  This undoubtedly helped pave the way.

Then, a few months ago, an expert panel appointed by the American Kennel Club came out very strongly in favour of accepting the LUA Dals.

And finally,  there was the Internet which allows the sharing of good information and the countering of the bad just as fast as anyone can read and type. As blogger Pat Burns ("Terrierman") wrote a while back: The Internet May Yet Save the Dog.

"I’m so very happy that the majority of the members of the Dalmatian Club of America have realized the importance of this issue and accepted that this is one way that we can move towards reducing and possibly at some point, eliminating urate stone disease in Dalmatians," says Mary-Lynn Jensen who is one of the Dalmatian enthusiasts who has helped address the concern and - in some cases blatant propaganda put out by the purists - with the facts. "So many people have put tremendous time, effort and love into this effort but I’d be remiss if I didn’t mention first of all, Dr. Bob Schiable, without whom, none of this would have ever happened.  It’s unbelievable that it took more than 30 years, for this to happen, but wonderful that it finally has."

Campaigner Marion Mitchell also paid tribute to Bob Schaible's vision: "[His] work has finally been recognized and Dalmatians the world over are thanking him tonight," she says.

The man himself? He was just popping out (for a celebratory lunch I hope!) when I called him at home in Indiana this afternoon but hopefully I will be able to add a few words from him later.

Jim Seltzer (Willowind Dalmations) urges some caution, expressing concern about the 45.1% that voted against the motion and pointing out that a lot of work lies ahead. "It was a long battle  and well fought," says Jim. "The opposition was entrenched and seemingly impervious to efforts at logical persuasion. More troublesome, and of continuing concern, was the discovery that the understanding of fundamental principles of genetics was not to be taken for granted. The concepts of risk analysis and haplotype preservation in the vicinity of a gene conserved by selection were foreign to many if not most breeders.

"Assuming that the AKC will now proceed with the registration of the LUA Dalmatians, the next phase, that of integrating the LUA breed-line into the broader population, is not without its own set of challenges."

But that's for tomorrow. Today is a day of rightful celebration.

WELL DONE TO ALL CONCERNED!
Posted by Jemima Harrison at 19:09