So thinks Elaine Geeson writing in this week's Dog World.

The thrust of Geeson's article is that designer dogs are being produced without care  - and that crossbreeding should be regulated.  "We now have tests to carry out before pedigree dogs are bred from in the hope that any malfunction can be ironed out and the breed will go from strength to strength," she writes. "Where are these guidelines and recommendations for the cross breeds, and who checks or regulates the truth behind all the spin given out on some of the advertisements given with crossbreed dogs?"

She's right - there are no breeding guidelines produced for breeders of crossbreeds,  something that would, in fact, be dead simple to produce and should be done. I imagine the Kennel Club wouldn't want to be seen as encouraging the filthy practice but this would be a very worthwhile job for the Dog Advisory Council, set up on the recommendation of the three dog-breeding enquiries that followed Pedigree Dogs Exposed. The DAC has a remit that covers all dogs.

Bad breeding is bad breeding across the board, regardless of whether the puppies are purebred or cross/mixed breeds. It all needs to be sorted.

After all,  there are heaps of purebred dogs being produced with no regulation or checks either - in fact, this includes the majority of dogs registered by the Kennel Club (only 12-13% per cent of KC puppies are born under the auspices of the ABS - of limited worth, anyway, for the 60 per cent or so breeds for which there are no health-test requirements). Then there's another undetermined number of purebred dogs produced outside the Kennel Club - perhaps as many again.

Geeson writes: "Diseases with serious consequences are in cross bred dogs. We have people breeding from bitches on consecutive seasons. A breeder who recently learned of a puppy she produced having Addison’s at seven months old repeated the mating of the parents on the dams next season. They are advertised on the internet, along with other cross breed dogs that do not have any come back."

Again, this is true of any number of purebred pups of dubious breeding from unhealth-tested stock being sold on various websites.

But yes, there are many ridiculously-named designer crossbreeds being produced with little care and attention by the unscrupulous, money-grabbing, uncaring, or just plain ignorant. And they are bought in some numbers by a gullible public.

This, apparently, is my fault because PDE told the world that purebred dogs were in trouble and that, on average, crossbred dogs are likely to be healthier - and never mind that this is true. (Although, if PDE was really so influential, by what madness have Pug registrations increased so hugely since the film?)

Geeson believes that designer crossbreeds have got off far too lightly in terms of media condemnation. As it happens, I'd agree. It is easy to be seduced by the undoubted appeal of a Puggle (to my view an improvement on at least one of its parent breeds) or the shaggy if sometimes over-enthusiastic bonhomie of a Labradoodle (or "labramongrel" as some of the most ardent purists call them in an effort to discredit them  - oblivious to the fact that to many outside of the insular world of purebred dog breeding 'mongrel' is no longer a pejorative term). 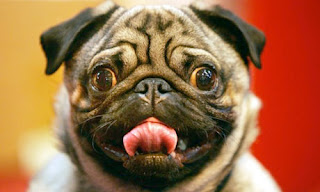 Science tells us that designer crossbreeds may benefit from some hybrid vigour - and those born of a union that includes one conformationally-extreme parent breed (such as a bulldog) are often an improvement on that parent thanks to nature's bent to normalise physical extremes given half a chance. They are almost always a half-way house (as, again, science predicts). No Puggle is as brachycephalic as its Pug parent and as a result it invariably has improved eye anatomy and and fewer respiratory problems.

But of course this doesn't get the people that produce them off the hook. All breeders have a responsibility to ensure that the puppies they produce have the best possible chance of a happy, healthy life and this, above all else, means breeding from sound stock.

Yep, F1 crosses will be exempt from recessive conditions that may lurk in their parents (as long as those conditions are not common to both breeds) and there is some good evidence that their immune systems may be better-braced to deal with onslaughts that might fell their inbred purebred cousins. But with more people breeding on from the first generation crosses, there's no doubt that health history and clearances for breed-specific problems are increasingly important. Then there are the conditions - hip dysplasia, thyroid problems, epilepsy - that are across many breeds and therefore likely to crop up in even first-generation crossbreeds, too.

So Geeson is right: something does need to be done about it. It's just that I'm not entirely convinced that she is highlighting the problem just because she's concerned about these crossbreeds' health and welfare.

That crossbreeds are being bred and sold for a lot of money is a source of continual irritation - fury even - to many of those that breed purebred dogs.  I can, of course, understand the frustration about people making a fast buck for little investment when many pedigree breeders put a lot of time, care and expense into their breeding decisions. But most of the ire is reserved for the very act of mating one breed with a different one. And that's just irrational. We need, then, to separate out the justified concern from the bigotry - for the latter is, at best, unthinking and, at worst, very ugly.

Have a look a what Geeson has written about Labradoodles on the Standard Poodle Club website. And note this: "It has been agreed at our AGM that members, or those causing detriment to the breed by cross breeding with other breeds are not considered suitable for membership, as they do not have the breed at heart."

There's a classic - and revealing - thread on the anti-PDE Facebook site today expressing outrage that someone might be allowing their champ Samoyed to be used on an agility Border Collie in order to produce a "black Sam".  Here's a sample:

• "Just been on a Samoyed forum I'm a member of, apparently someone is trying to Breed Black Sam's by cossing them with Border Collies ! I'm trying to get more information ..all I know so far is that the Bitch ( BC ) is an agility ch and the Dog ( Sam ) is a Show Champion !!........... who is there right minds ... Would use there CH Dog !!! and how guillable are people that they would believe it !!!"

•  "I am INSCENSED/ FURIOUS and any other word you can think of!! I won't let this drop now, enough breeds have been tampered with, I'm not going to let it happen to Sam's !

• "THAT Woman has a lot to answer to now - i wonder where she will be when the kennels are full as none will be eligible for breed rescue.. "
(Ey up, my fault again...)

• "Why would you want to make a Black Sam anyway? And to cross it with a Border Collie so the dog is burning hot in the summer and freezing cold in the winter. And want to herd sheep while pulling a sled. I see how those two breed compliment each other."

• "Sadly it seems no breed can be left alone!It just makes me speechless with anger that someone can spend all that time,effort and money into making up a ch to produce mongrels!I was amazed and dissapointed when i heard of a person i know well allowing her studs to other breeds,now i know how she affords to do the things she does,i am so naive sometimes!!!!!"

• "No no no! leave our Sams alone! They are perfect as they are!"

• "Let's call this what it is.....the breeding of mongrels. I will not give not give credence to these people by dignifying what they are doing with a name apart from money-making puppy farming."

• "And let's not loose sight of this, this iis due in much part to Ms Jemima Harrison dissing pedigree dogs and claiming crosses are healthier. I wouldn't like to be her when she arrives at the pearly gates......there'll be no excuses there for all the little dogs that have been born and lived hellish lives, and ended up murdered at some dog shelter...  I don't know bow she sleeps at night. I sure as heck couldn't if I'd caused all those poor dogs all that misery. At least the puppy farmers used to have to wait for the right sort of dog to put to the right sort of bitch. Now, poor wee bitches are forcibly raped with anything. And make no mistake....they don't have romantic liaisons."

It has always struck me as racist - the same kind of unthinking, recoiling shock that people used to express about mixed-race marriages. They really do see the deliberate breeding of two different breeds as an unholy union - and the people who breed them as evil when, logically, they can only be as good or bad as any other breeder.

It makes my skin crawl.
Posted by Jemima Harrison at 15:50