Hate, hope and the HSUS

The "Stop the BBC Making Another PDE" Facebook site (which now includes AKC Chairman Ron Menaker as a member) yesterday scored what they think is an enormous scoop.

Rather belatedly, they've discovered a blog post here, and the accompanying debate, about whether or not I should speak at the Purebred Paradox conference in Washington in April that was co-sponsored by HSUS.  My attendance was considered controversial by many for the reasons explained in the post and the comments reflect this. Most (although not all) thought I shouldn't go and said so strongly.

Now the anti-PDE FB site has found and proudly cached it - as if, perhaps, I've left up all those negative comments up there by mistake for the past three months, rather than because I might actually invite debate.

Here's the somewhat surreal exchange on the Facebook site - which, as you'll see, includes a berating for the "cowardly person" forwarding me material from the site. Their problem with this? It is giving me an opportunity to rebut all the lies and misinformation being posted there - on my Myths Busted page (see tab above).

Anyway, at least it gives me an excuse to write, rather belatedly, about what actually happened at the conference (which was also sponsored by the RSPCA) and what my conclusions are.

Yes, I did go and, yes, HSUS did pay for my flight and a modest hotel room (as it did for all the other speakers). This was not quite enough to buy my soul.

The conference was, essentially, an academic meeting (links to abstracts and speaker biographies here) marking the launch of the Humane Society's new Institute for Science and Policy  and I spoke alongside some very eminent names, including Professor Sir Patrick Bateson.There was a lot of support for good breeders from many of the speakers and much constructive talk at a workshop on the second day on how to encourage breeders to adopt better practice.  A real beacon on this was, and is, Brenda Bonnett whose inspiring presentation on Disease Risk for Disease in Purebred Dogs was the highlight of the conference for me - just brimful of humour, good grace, and empathy for dogs and breeders.

Other notable speaker/attendees included Ake Hedhammer, (who is organising a Dog Health Workshop alongside the the 6th Canine and Feline Genomics Conference in Sweden next year),  Gail Smith (who founded PennHIP), Wayne Cavanaugh (President of the UKC), vet/labrador breeder Fran Smith (whose many pertinent qualifications include being President of the Orthopaedic Foundation for Animals), vet Patty Haines (who has served multiple terms on the AKC Board of Directors), vet/author Bruce Fogle (co-founder of Hearing Dogs for Deaf People) and geneticist David Sargan from Cambridge University. All good people with a genuine interest in dogs.

There were fewer than 100 people there all told - a disappointing turnout that was undoubtedly as a result of the HSUS involvement. But I am pleased that at least some breeders braved it - including Sharyn Hutchens of Timbreblue Whippets, who has written a thoughtful report of the conference and its consequences.

So what did I think of the HSUS interest in the pedigree dogs issue? Well, I met several HSUS staff who clearly care very deeply about animals (although I did sigh a little at the wide-eyed insistence from one of their staff that allowing a cat to venture outsde was the very height of animal cruelty. He was horrifed to hear that most cats in the UK get to be, well cats - although, in truth, I think he was mostly trying to point out that in getting to be cats not so many birds get to be birds).  And Andrew Rowan, Chief Scientific Offcer of HSUS, did his best to reassure that their approach would be firmly rooted in science not animal-rights-fuelled rhetoric.

But I have to be honest.. and after three  months of thinking how on earth can I say this without causing offence to my hosts:

Thank you for the vegan muffins - but if you really care about the dogs, please butt out of this one.

The HSUS hierarchy is clearly frustrated that dog breeders see them as the enemy.  But, let's face it, this is a bit like Hannibal Lecter whinging that it's unfair that everyone thinks he's going to eat them.  Sure, he claims he prefers a pre-packed T-bone from Tesco's these day, but..

Yes, HSUS has been less vocal on the mandatory spay-neuter issue recently, and it's a long time since any of their number has said anything ridiculous about keeping domestic animals being tantamount to slavery - but HSUS still pursues punitive local ordinances that persecute and alienate good breeders. Really, this means that there there is just too much bad blood for HSUS to take this on as an issue in an effective way for the dogs.

But I am glad I went to Washington.  A big thank you to Professor James Serpell from the University of Pennsylvania for organising the conference and for  inviting me.  I hope it was helpful for HSUS to hear how complex and nuanced this whole issue is from the many excellent speakers. I also hope it was helpful for the scientists, too often divorced from the on-the-ground reality of dog-breeding, to have more grass-roots imput (and also, particularly  to understand why dog people do not want the HSUS to be involved).

As for the anti-PDE Facebook site.. Let's get this straight: you are entitled to campaign for what you believe in.  It is, after all, all that I ask too.  Lobbying for better representation of good breeders in PDE 2 is a legitimate pursuit (although a few emails would probably be as effective).  But stop the silly bitchy stuff  - which last week extended to horrendous personal slurs of Beverley Cuddy and her exemplary Don't Cook the Dog campaign (started after two police dogs died recently in a hot car) simply because she is editor of Dogs Today - a magazine for which I write a regular column. 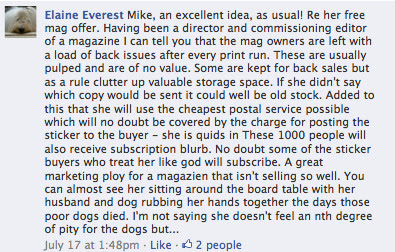 Posted by Jemima Harrison at 04:40