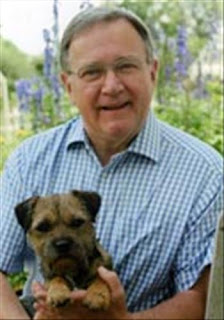 Kennel Club Chairman Ronnie Irving announced  today at the KC's Annual General Meeting that he is standing down - after nine years in the big job. The big surprise might be that he hasn't gone sooner. Ronnie intimated to me more than three years ago (at an interview for Pedigree Dogs Exposed in January 2008), that he did not see the unpaid post as a job for life and hinted strongly that he did not need the hassle that might come after Pedigree Dogs Exposed.

To give him credit, Ronnie stayed put and bore a considerable brunt of the storm - and, personally, I always saw him as someone who embraced at least some reform. First off, he has Border Terriers - a dog with a natural conformation and few health problems. And although he also has Dandie Dinmonts, he did once tell me that he was open to an outcross to inject some much-needed vigour into the Dandie (even if he didn't put his money where his mouth is and actually do it himself).

Then there was the May 2008 editorial in the Kennel Gazette where Ronnie spoke out strongly about exaggerations. There was also some fighting-talk (albeit behind closed doors) regarding the German Shepherds after PDE, and a very strong letter (which made its way into the public domain) to an overseas correspondent saying that to go on as before as regards health was unacceptable.

So why has he gone now? I suspect - but of course it's only a guess - that after the three years post-PDE presiding over the Kennel Club during the most difficult time in its history, that he's tired of the fight and looking for a quieter life.

I wish him well. For what it's worth, of all the senior bods at the Kennel Club I have dealt with, I liked Ronnie the most.

The full text of Ronnie's goodbye letter is on the Kennel Club website here.

So who's going to be the new Chairman? The election is on June  7 (with Ronnie at the helm until then).

And, boy, is that going to be interesting...  Will it be the same-old same-old - or the reform-embracing regime change so many people want?

Watch this space...
Posted by Jemima Harrison at 15:41