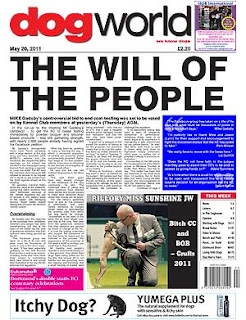 Oh to be a fly on the wall at today's Kennel Club AGM... Following on from my blogpost earlier this week which highlighted the grumbling in the ranks regarding the KC's attempt to stop exhibitors enhancing their dogs' coats with hair spray, chalk, silicon, dyes and so on,  Dog World runs with an extraordinarily-bold headline on its front cover that should get them summarily barred from not just this year's Annual General Meeting, but every one for the next 10 years.

The calls for a more democratic KC (as exists in Sweden where everyone who registers a dog gets a vote, not just the select few who have been invited to the hallowed ranks of KC membership) are undoubtedly getting louder.

But, goodness, wouldn't it be nice if the reason for the revolt was a demand for better health, rather than the a right to slap any old 'product' on their pooches?

So now the KC finds itself in a tricky place. With the outside world watching, and the KC keen to prove that the show-ring has integrity, it would be impossible to give in to the protestors and allow them carte-blance to L'orealise their dogs. I strongly suspect they are opposed to it in principle anyway.  KC Secretary Caroline Kisko has Siberian Huskies (and proper ones, at that, without the mad excess coat seen in some overseas show-rings); Chairman Ronnie Irving and Steve Dean both have Border Terriers and Anne Macdonald has salukis - all of which need minimum prep for the show-ring.

How to resolve? Well how about dipping a toe into democracy and having a referendum? To get the ball rolling, here's a poll...

What should exhibitors be allowed to do to prepare their dog for the show-ring?

Posted by Jemima Harrison at 13:03