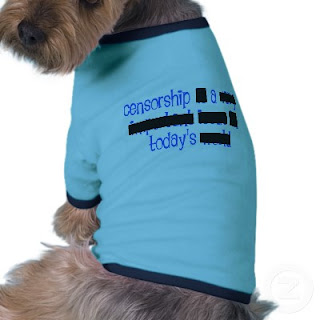 You  know an organisation is in trouble when it starts clamping down on media access and the Kennel Club has again shot itself in its clumsy paw by banning Dog World from its AGM this coming Thursday (19 May).  For those that don't know, Dog World has enough objective professionalism to be able to criticise the Kennel Club from time to time but it is, essentially, a KC/dog-show-friendly paper with loyal support from breeders and exhibitors - partcularly the brighter ones who prefer it to the badly-written KC-toadying of its rival, Our Dogs.

(This blog, by the way, is brought to you from outside of Kennelclubistan where freedom of the press - however uncomfortable this makes it for some - is considered a basic tenet of democracy.)

Dog World's crime? Reporting on a campaign by champ Poodle breeder Mike Gadsby to stop the KC Stasi (as some breeders are referring to them) coat-testing Fi-Fi and Frou-Frou for such criminal substances as conditioner and the odd squirt of hairsrpay.  Discussion of this topic is, apparently, verboten because it is an item on the agenda for Thursday's AGM and the KC doesn't want agenda items to be reported ahead of the AGM (the fear being that the way they are reported might unfairly influence the way members vote). But, of course, this one is already in the public domain via a Facebook page (UK Show Dog Exhibitors Who Support An End To K.C. Coat-testing) and many other discussions on the internet.

As senior judge and Dog World columnist Andrew Brace commented on the Facebook page (a comment I now see has been removed) the KC's obsession with hairspray is "confusing" when greater misdemeanours such as altering terriers' ears and tails appear to go unmonitored. Eh? Ah yes, those perfect ear-folds are, apparently, sometimes achieved with the aid of flattening irons, while bolt-upright tails are occasionally achieved with the aid of stiffening wire. (And if you don't believe me, have a close look at some of those undocked Kerry Blue tails in the UK show ring - unless, perhaps it's Viagra keeping them bolt-upright?)

But while there's no doubt that Gadsby and the 2000-plus people who have already signed his petition have a point, arguing that harmless cosmetic enhancement is OK because there are greater ills out there is very often the tactic of those resenting personal scrutiny. (I say this, of course, as someone who is very often challenged to deal with the real problem of puppy mills rather than all those lovely people doing their best to breed happy, healthy pedigree dogs.)

I suspect the KC's focus on hairspray and talc is driven by two things: first, it's pretty easy to monitor and second, stopping it would in their eyes restore some of the show world's reputation as not just a bunch of fruits doing silly things to their dogs in order to win rosettes. But, surely, what needs to happen here is surely that the KC doesn't just scratch-and-sniff Poodle coats, but makes some attempt to police the more serious cheating that goes on - such as ear-crimping or the implantation of false testicles. When I last checked with the Californian company that sells Neuticles, they told me that over 3,000 pairs of them had been sold to the UK. Now the company absolutely insisted that they were being bought by ordinary pet owners who want their neutered male dogs to look more macho. Hmmm.

Separately, and rather quietly, the KC has also tried to tighten up rules regarding photography and filming at shows. The following has recently been added to most champ show schedules:

The relevant new bit here is: "Specific dogs may be photographed only with the approval of the exhibitor" and essentially it means that if I or anyone else should see a Bulldog gasping for breath, or a Peke on an icepack, or a Basset Hound with sore eyes or a Neapolitan Mastiff burdened with an absurd amount of excess flesh, that it can no longer be photographed and reported.

In truth, there are many ways round the new rules, but this is dangerous territory for the KC and I don't believe that any truly-thinking person in the dog world wants their sport to be hidden like they're a bunch of fiddling paedophiles who have to indulge their guilty pleasure behind closed doors.

Yes, outside scrutiny can be uncomfortable and irritating and sometimes unfair. But either there is a case to answer or there isn't. The KC must be able to withstand this kind of scrutiny - and to either robustly defend what has been reported/photographed or accept that changes need to be made.

Don't suppose regime change is an item is on the agenda at this year's AGM,  but the voices from the people of Kennelclubistan calling for democracy are getting louder.
Posted by Jemima Harrison at 15:56