If the following landed in your inbox - as it did in mine recently - who would you guess was behind it? 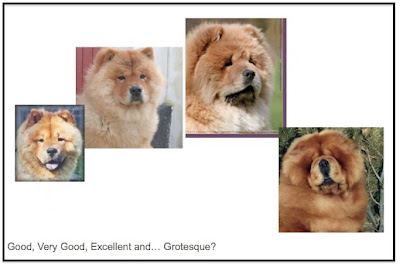 Or how about this?

Is it me plotting the sequel to Pedigree Dogs Exposed? Or perhaps it's the RSPCA or even the HSUS trying to make a point about "mutant show dogs"?

Surprisingly, it's from the most recent FCI newsletter  - the FCI being the umbrella organisation for more than 80 kennel clubs worldwide (the UK and US being notable exceptions), setting standards and regulating shows. It is, in fact, a progression of a Swedish initiative first published in 2008 designed to alert judges to the need to be careful not to reward obviously-exaggerated dogs.  Then, it highlighted 47 (out of around 300 FCI breeds) that needed attention. Today, there are 46 on the list.

Read the whole thing here - and ask yourself if the AKC - or even the semi-reformed KC - would go into print referring to a Chow with extreme conformation as "grotesque" or admit so bluntly (as does the FCI newsletter) that: "Dog shows and breeding of pedigree dogs are correctly criticized for promoting breed type exaggerations constituting risks and hazards for the heath and soundness of individuals as well as entire breeds."

Wow. Gotta hand it to those Swedes - and, actually, the FCI, too, for its most recent Breeding Strategies which, among other things, recommends... "To preserve, or preferably extend, the genetic diversity of the breed, matador breeding and heavy inbreeding should be avoided. Mating between siblings, mother to son or father to daughter should never be performed. As a general recommendation no dog should have more offspring than equivalent to 5% of the number of puppies registered in the breed population during a five-year period."

Disappointingly, the KC in the UK has yet to issue any guidance regarding popular sires. But one of the direct impacts of Pedigree Dogs Exposed was the decision by the KC  to no longer register the progeny of first-degree relative matings and it is coming under growing pressure to ban  grandparent/grand-offspring matings, too.

In America, meanwhile, you can still mate fathers to daughters, mothers to sons and brothers to sisters and the AKC will still register the puppies - and you can continue to use that top-winning dog at stud as often as you like, and to hell with the genetic consequences.
Posted by Jemima Harrison at 22:24