Oh dear. I have upset the Basset Hounds - or rather their owners.  They think my highlighting the breed in Pedigree Dogs Exposed was unwarranted and that the Basset should not be one of the 15 breeds that, from next year, will be subject to health checks at shows.  It is, they feel, very unfair to be stigmatised this way. And it is, apparently, all my fault.

In fact, the Vice Chair of the Basset Hound Club, Dave Darley, has asked me if I could help undo some of the damage I've done by posting two illustrations to support his (and other breeders') view that the Basset Hound we see in the ring today is "correct".

So here they are.

This first one is from an illustration dated 1880 of some Bassets imported from France. 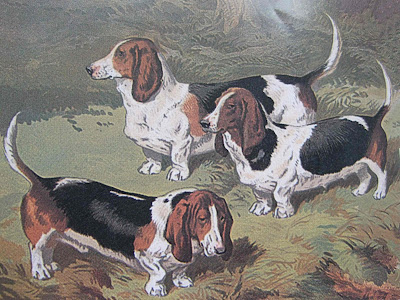 The second one is an illustration which Dave says shows how the Basset is designed to be a normal dog - just one with short legs: 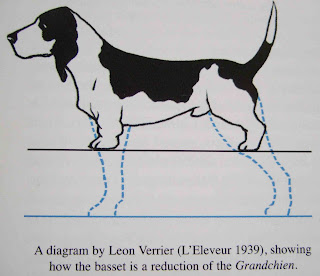 So where does this leave us?

At an impasse, actually.

I accept that Basset breeders have done a pretty good job of straightening the Queen Anne front legs that were once such a feature of the breed. I also agree that Bassets are a pretty long-lived breed.

But the Comments section on my last Basset blogpost makes it clear that many Basset breeders are in denial about the cost of the conformation they are imposing on this dog in order to meet what they think is the correct template for the breed.

Exposed haws? No, they don't provide little pockets where debris can collect and damage the eye.

Very long ears?  They're needed to channel the scent into the dog's nose (and no matter that all the show Basset ever has to do is find its way to its dinner) and, hey, show me the proof that they damage their ears if they tread on them.


Dewlap? Yep, that traps the scent, too (well that's what we've always been told)

Loose skin? Needed to protect the dogs from brambles and thorns and, yep, if no hunting pack of Bassets has loose skin it's because they're crossbreeds!


Skin folds?  Other breeds suffer from yeast and bacterial skin înfections, you know, and we don't accept that it's directly linked to the skin folds - even if the bacterial form is called "skin-fold dermatitis".

Back and joint problems?  Yes, we know the veterinary literature indicates that the breed is prone to both, and particularly arthritis as they age, but it's nothing to do with their short legs, long backs and enormous weight for their size.

The point is that the dogs that actually do the work for which they were developed - which is the whole reason the breed exists - don't look like this. The show-breeders, though, simply dismiss the lighter, longer-legged hunting bassets as mongrels and blithely carry on trying to replicate a dog they've seen in an old painting, no matter what the cost to the dog.


They seem oblivious to the fact that the above painting is, at best, merely a snapshot in time and, at worst, pure artistic license. We have no idea if the dogs illustrated ever did a day's work; if the people who bred them knew what they were doing; or if these dogs, with their strange knees, were really good examples of the breed (indeed, imports were often the dregs of a breed as the country of origin wanted to hang on to their best dogs).
The breeders also insist that Bassets that looks like the one below are still capable of hunting rabbit and hare.


Now, I guess the mind might be willing... but the flesh? Really? Just look how close to the ground this dog's penis is (here's hoping the terrain is Wimbledon tennis-flat..) .  Just look at the excess skin and the droopy pouch of skin on the dog's hocks. That serves what purpose, exactly?

I understand that the Kennel Club isn't much more sympathetic to the Basset breeders than I am.  Again, apparently this is all my fault (and never mind the wealth of veterinary literature that also supports that it's a struggle to breed a dog to this shape without problems). Dave Darley has suggested that I might like to write to the Kennel Club to tell them I was wrong about the Basset Hound.

Sorry, no can do.  But  I  have a suggestion to make which will, at least, buy the Basset Hound Club some time and may even allow them to prove that they should be allowed to keep the dog as it is.

There is no health information - whatsoever - on the Basset Hound Club website and I couldn't find any on the regional clubs' websites, either.  If the Basset breeders want to prove that they are serious about health, this needs to be remedied.

They also need an ongoing breed health survey, properly designed by someone like epidimiologist Vicky Adams, who can help them establish exactly what problems are prevalent in the breed and how they correlate with conformation.  And it needs to be online so you reach as many Basset owners as you can, regardless of where they got their Bassets from (and where they got their Bassets from also needs to be a survey question so you can establish if - as is maintained - that the show-bred dogs are healthier than their pet-bred cousins).

No one is arguing for a Basset ban - just for moderation. And, as infuriating as breeders must find it, if you're going to breed a dog that so many outside of the breed (including vets) see as prone to problems, particularly as they age, I'm afraid you're going to have to go the extra mile to prove that it is not the case.

Here are some American Bassets having a great day out in the snow - all longer-legged; all leaner; all with tighter skin and still, absolutely, Bassets. Now the video is entitled "Hunting Basset Hounds" and am not sure they're really doing that - but I'm in full support of the American Hunting Basset Association's goal of not letting the breed "degenerate into a bunch of overweight couch potatoes."

Not, of course, that Bassets are really allowed on couches. That's because, as the clubs advise new owners,  they are in danger of damaging their backs when they jump off.

Posted by Jemima Harrison at 13:56