Bassets then and now

Now have a look at the Basset that won Best of Breed at Crufts this year.

Now, the  modern dog is much more moderate than many we've seen in recent years.  The dog below, for instance, won Crufts in 2008, just before Pedigree Dogs Exposed highlighted the issues in this breed. And it's not just that one is male and t'other female. 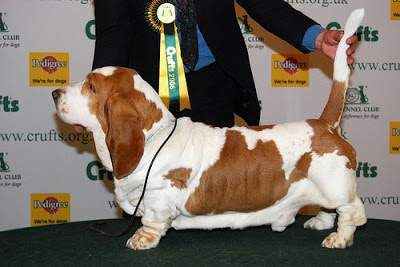 But while welcoming the moderation we've seen in the last decade,  I think the dog of old is just SO much better put-together than the 2018 Crufts winner: no dollops of flesh hanging off his hocks or neck (well anywhere really);  smaller ears, greater ground-clearance, a lovely rounded bum (honestly, dead straight top-lines are completely unnatural), and that whole rear-assembly is just so much more natural. You can really imagine the dog doing a day's work - running freely without leaving most of its body half a second behind.  And of course, today's true hunting Bassets look like the old dog, not the Crufts winners.

Upshot: there is progress but show Bassets still need more leg and less flesh - and the only dollops we need are of common sense.