In a landmark move, the Dutch Pug Club has responded to bad publicity, unrelenting pressure from campaigners, a wealth of science elucidating the breed's many health issues and strengthened animal welfare laws in the Netherlands.

They have just announced the following reforms:

• opening of the stud books to allow interbreeding with non-registered Pugs (that may or may not be  purebred).
• the introduction of a minimum craniofacial ratio (muzzle/skull length)
• a limit on the number of litters any one stud dog can sire
• the introduction of a second endurance test designed to ensure that only the fittest dogs are bred.

You can read the statement here if you understand Dutch (and if not you'll need to pop it into Google Translate). If an official translation into English is made available, I'll add it here.

The idea is to increase genetic diversity (studies suggest it is very low) and moderate the very flat-faced Pug that is currently in vogue. Pugs have varied a lot in form historically, but have never been as flat-faced as they are now and it has resulted in considerable respiratory and ocular problems.  Recent research undertaken by Cambridge University shows that 70% of Pugs aged 3-7 have significant problems breathing - clearly unacceptable.

Now I expect my interpretation of the impact this could have might be different from that of hard-core show breeders in Holland but, if accepted by the Dutch KC (and the word is that it will be), it's possible we will start to see KC-registered Pugs that look more like this 'Retromop' below - leggier, more athletic and with more of a muzzle. (Retromops have been crossed with Jack Russell then bred back to Pugs to create a more moderate dog. There is also an "Altedeutscher" Pug in Germany that is more moderate and purportedly purebred.) 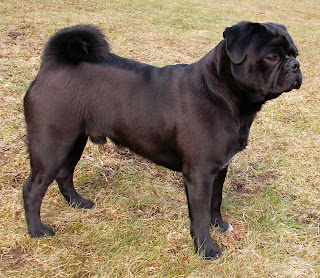 More importantly, a move like this really paves the way for other breeds, and a new wave of younger, more science-savvy breeders,  to follow. And, technically, if registered in Germany they can be registered in other FCI countries and any countries that have a reciprocal arrangement with the FCI (such as the UK Kennel Club).

Great news for the breed - and possibly many others, too.  Well done the Dutch Pug Club!

Posted by Jemima Harrison at 14:50