AKC: a nose for flummery 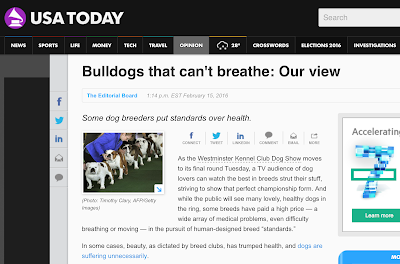 To mark this year's Westminster Dog Show, the national newspaper USA Today has waded into the dog-breeding debate with a strong editorial arguing for change. It refers to the shape of the current Bulldog as "tragic" and  calls for "sustained commitment and action to demonstrate that the AKC and U.S. breed groups can earn the title of dog’s best friend." (Read the whole thing here.)

The paper has, in return, given the AKC a right of reply, written by the AKC's chief veterinary officer, Jerry Klein. It is, I'm afraid, the usual blah, blah, blah.

It includes the erroneous claim that line-breeding is not inbreeding (er, it is) and the claim that dog shows preserve function (er, they don't).

It also includes this little gem:

"The AKC works with breed clubs that are responsible for creating and maintaining a standard of integrity and tradition for each breed. Breed standards define ideals in appearance, structure, movement and temperament for a breed. For example, if a standard describes a dog’s nostrils as being wide and large, a dog with narrow nostrils that inhibit its breathing should not be rewarded by a show judge, and responsible breeders would not breed from it."

Sooo... how about we have a little look-see at the AKC standards for the extreme brachycephalics (short-faced breeds) - the ones who most need wide open nostrils. While we're here, let's have a look at the pictures the AKC uses to illustrate them, too.

Sadly, the AKC standard makes no mention at all of what a Pug's nostrils should look like (see here), so a Pug's pinched nostrils cannot be penalised in the show-ring. The standard needs to change as this breed is the worst for respiratory problems, in no small part  caused by stenotic (pinched) nostrils that are endemic in the breed.  The Pug pictured has narrow nostrils and is over-wrinkled.

French Bulldog: :"The stop well defined, causing a hollow groove between the eyes with heavy wrinkles forming a soft roll over the extremely short nose; nostrils broad with a well defined line between them"

Again, no mention of the nostrils needing to be "wide", "large" or "open". This needs to change.

The AKC's Bulldog standard includes this: "The nostrils should be wide, large and black, with a well-defined line between them."

Good to see the words "wide" and "large" but it needs to add the word "open" - and next time try to find a Bulldog without stenotic nares - and, for that matter, without ectropion (those sagging bottom eye lids).

From the standard: "The nose is black and wide, with a well defined line between the nostrils... " No mention of nostrils there but listed as a fault separately is: "Pinched or wide nostrils."

Eh? Now they're saying that 'wide' is a bad thing? Come on AKC, this needs sorting. And, again, the AKC has illustrated the standard with a dog with pinched nostrils. 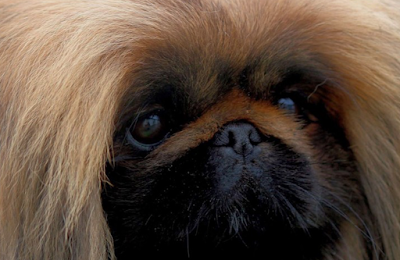 The AKC's Peke standard is the only one of the extreme brachycephalic (short-faced) breeds that spells it out.

It specifies: "Nose - It is broad, short and black. Nostrils are wide and open rather than pinched. "

Well done for that.

However, the nostrils on the Peke the AKC uses to illustrate are neither wide nor open.

None of the nostrils on the dogs used by the AKC to illustrate their brachycephalic standards are acceptable.

In fact, according to the AKC's own words above ("a dog with narrow nostrils that inhibit its breathing should not be rewarded by a show judge, and responsible breeders would not breed from it") none of the dogs above should ever be bred.

Here, for comparison, is a great-looking French Bulldog with good, open nostrils. 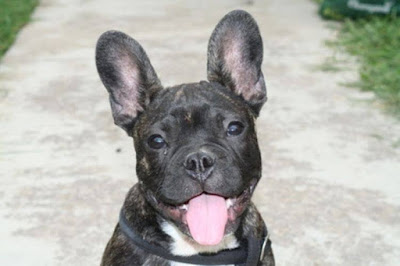 And here's what a normal dog's nostrils should look like, front view and side view. 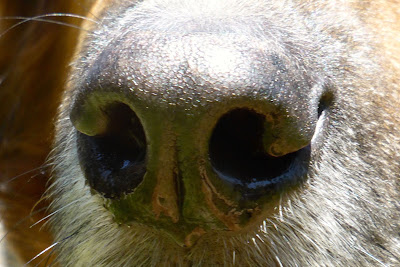 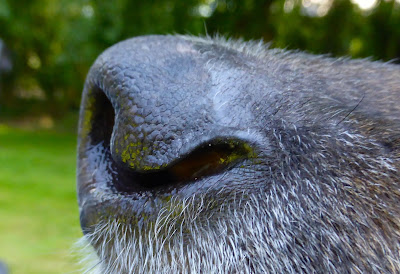 Remember that while dogs pant through their mouth, they breathe through their noses. It's really important that those pipes are open - especially when you've been bred with a very flat face that has already compressed and buckled those airways on the inside.