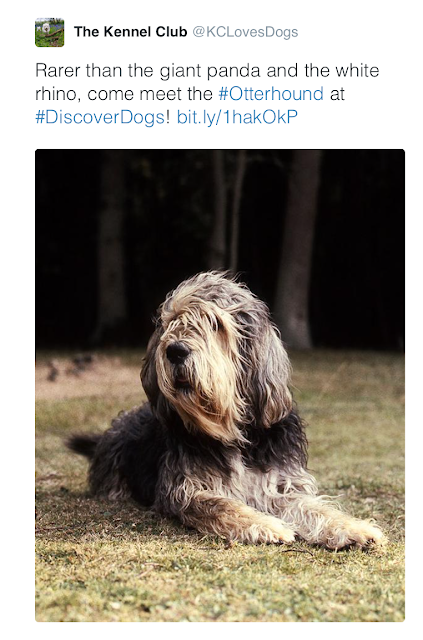 Oh great. So now the Kennel Club is celebrating how endangered the Otterhound is?

The sad truth is that the Otterhound is about to be consigned to history and the Kennel Club is doing nothing to stop it. Obscenely, the KC has the bald cheek to compare the Otterhound to the seriously endangered giant panda and white rhino while mustering none of the effort we see conservationists make to save wild species.

And how ironic that KC twitter handle... because if the KC really loved dogs, it would be doing so, so much more to ensure their future.

The population data released by the Kennel Club last week revealed that the Otterhound is on its last legs - only 22 puppies born last year in the UK, and very few born abroad.  They're all horribly inbred.  There is no job for them any more. And no demand for a big, shaggy, sometimes smelly dog which - the KC helpfully reveals in its Discover Dogs lowdown here - has a tendency to kill small furry things and can rarely be let off lead safely.  Oh, and they slobber.

The breed club in the UK has a good health rep in Judith Ashworth and there is a lot of helpful health info/ongoing surveys on the breed club website (you can find them here). But, goodness, they make for depressing reading.

The reports suggest that the breed suffers from a high rate of epilepsy, cancer and hip dysplasia. The breed's mean hip score is 46.5 - severely dysplastic. In fact, the Otterhound has the worst hips of any breed in the UK and they are getting worse (if you look at just the last five years, the mean hip score has risen to 51). Breeders are continuing to breed from dogs with hip scores over 100 because there are so few dogs they feel they cannot be fussy. There is an increasing number of reports of low-litter sizes; almost certainly due to inbreeding depression. Average COI has risen almost 2% in the last two years (up from 16% to 17.9%) The breed has an effective population size of 33 - genetically unsustainable.

And while there was some talk a couple of years ago of an outcross to save the breed, that seems to have died a death. Like the breed itself is doing.

In 2012, the breed's UK health rep Judith Ashworth said: “Outcrossing is certainly one option that we are very keen to look at, because we do need to increase the number of dogs that are contributing genetically to the very small population of dogs within our breed. We look forward to working with the Kennel Club and the Animal Health Trust to find solutions that will protect our breed in the future.”

Since then? Nada. Zilch. Nothing. I imagine that however keen Janice may be to explore crossbreeding, she has had little or no support from breeders. It is the equivalent of the zoos of yesteryear - happy to parade highly endangered species for the public to see, while doing nothing to protect and preserve them.

That changed. Why can't this change too?


Why aren't the KC and breeders working with conservationists who understand this stuff and have brought many species back from the brink?   Why aren't there specific breed conservation plans? Why aren't you talking to those who are successfully managing rare livestock breeds? Seriously, in breeds like the Otterhound, we are way beyond softly-softly advice to limit the use of popular sires and encouraging breeders to DNA test.

Am I the only one who feels any sense of panic?

Now, I don't have a problem with the breed going extinct. It's the manner of the Otterhound's extinction that sticks in the craw. The dogs are dying fitting, limping and painfully in the hands of breeders who will look you in the eye and tell you they love the breed but who in reality are the agents of their destruction through their obsession with blood purity and their unwillingness to embrace modern science.

RIP the Otterhound. Like all dogs trapped in closed gene pools under the auspices of kennel clubs... you deserved better.
Posted by Jemima Harrison at 01:09