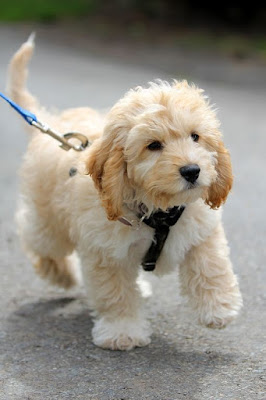 Yesterday, the UK's Telegraph revealed that the nation's favourite dog is a doodle.

Well, actually, it was the "Cockapoo/Labradoodle etc"

Pedants among you will point out that this is actually rather more than one breed - although, in fairness,  the Telegraph also offered "Spaniel", "Setter" and "Labrador/Retriever" as options covering whole breed types there, too.

The purebred pedants, meanwhile, will point out, in capital letters and with a lot of exclamation marks, that THESE ARE MONGRELS NOT BREEDS!!!!!!

But the poll was telling. The purebred Poodle only managed 22nd in the poll in which 30,000 readers voted.  (Good to see too that Telegraph readers don't rate the Pug and Bulldog either  - 19th + 20th in the poll respectively)

The scruffy poodle crosses are massively popular in the UK - and the good news is that there are an increasing number of good breeders of them.

The Cockapoo Club of GB actually sets higher standards for its breeders than many purebred breed clubs.  It has... wait for it... 12,000 members.

The UK Labradoodle Association also has a Code of Practice and minimum health requirements for its breeders.

The basic rules for prospective doodle buyers are:


• make sure the pup's' parents have been health-tested for the problems that afflict their component breeds.

• walk away if a breeder guarantees you a hypoallergenic pup. (Some are low shedding, but many are not).


Also, remember that the much-touted 'hybrid vigour' health benefits are more evident in the first cross (known as F1) pups. The F2/3/4 generations are less predictable health-wise and in looks too - although there are some very nice dogs.

In fact, they have in the main fantastic temperaments. Some of the big Labradoodles are a bit full-on, but I've never met a nasty one. I went to a big Labradoodle event a couple of years ago and was quite astonished at how well dogs that were perfect strangers played with each other - and there were literally dozens of them running around off-lead.

Beware of the coats, though. Every groomer I know whinges about them - although some of that stems for new doodle owners under-anticipating how much care the coats need; something most purebred Poodle owners know enough about to ensure the dogs don't get too overgrown/matted.

I confess I am not a fan of poodle/shaggy coats myself. I keep my "pretend" doodle (the imaginatively-named Curly) - clipped down most of the time, especially during the autumn/winter burr season here in Wiltshire.  Curly is three-quarters Irish Water Spaniel and a quarter Collie. My dog trainer says she's one of the smartest dogs she's ever known - and I'm very much hoping that the mixed blood will protect her from the cancer that kills purebred Irish Water Spaniels in their droves. 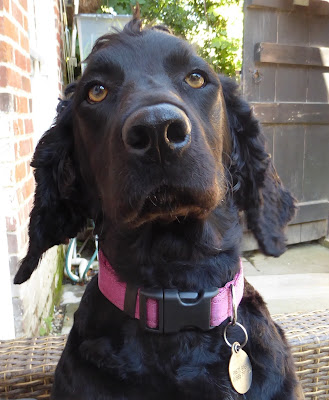 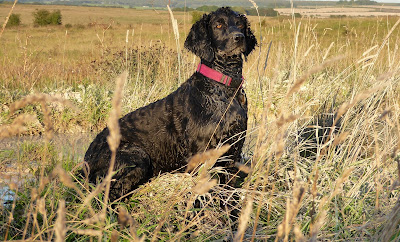 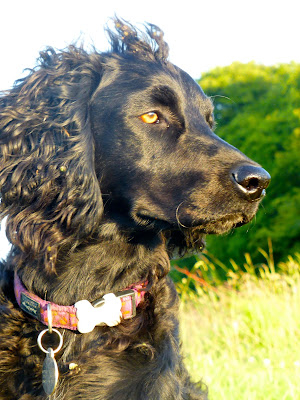 Posted by Jemima Harrison at 16:05