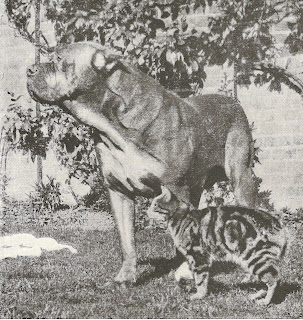 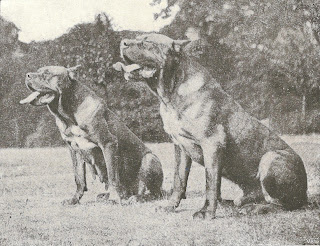 Many thanks to Ann Cardon for sending me these pictures from a 1901 edition of the Windsor Magazine - part of an article entitled "A Connoisseur in Curious Pets" featuring a Mr H C Brooke of Welling in Kent.

The colourful Mr Brooke, who trained as a vet in Berlin,  kept foxes, polecats, wolves, a dingo, snakes, a leopard and several breeds of dog - including these Dogue de Bordeaux.

"I introduced that ancient and historic breed the Dogue de Bordeaux into this country with the help of Mr G R Krehl," reveals Mr Brooke. "But as the breed has been killed by the anticropping regulations of the Kennel Club, I have given up benching these valuable speciments. I admire them immensely, as I consider, next to the Tibet mastiff, the dogue is the grandest breed of all. I tested them at baiting a bear, and I know what they can do. I have also tried the dogue at a bull with excellent results."

I had no idea they used to look like this - and, as is so often the case, I prefer the dogs of yesteryear.  The pictures above show a stocky, powerful, but more athletic-loooking dog compared to the squatter, increasingly-brachycepahlic, more wrinkled dog you more usually see today. Indeed, you'd be hard-pushed to believe they are the same breed.


To check how typical these dogs were, I had a look at Pietoro's wonderful Historical Dog Breed site and found this picture of "Turc",  one of the very first Dogues to be imported into the UK dating from 1897: 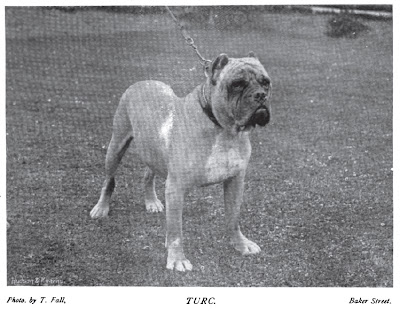 This dog looks more like today's dogs (although longer-legged) but Brooke's dog "Sans Peur" (top pic) was a Champion (clearly shown, despite Brooke's irritation with the ban on ear-cropping - introduced in England in 1899).

I was particularly struck by the early dogs' nostrils... huge great pipes on all the dogs in the historical pix (and in old breed books, too).  And that, at least, would be a good thing to see in more of today's Dogues who often have stenotic nares that compromise breathing/temperature control on warm days, as I caused some uproar by mentioning in a blog about Dogues at Crufts four months ago.

I note that the KC's Breedwatch still doesn't list stenotic nares as an area of concern for the Dogue de Bordeaux. It would be good to see this added.

Mr Brooke, incidentally, was  keen dueller. "I have been and still am a great believer in the duel.... My own nose has been cut off and my skull splintered; the loss of several teeth from a cut is common but death is very rare. I have, however, seen death on the spot in the case of a sabre duel."

Now how about that as a way to settle those Facebook squabbles?
Posted by Jemima Harrison at 17:46