Who's Your Daddy - Take Two 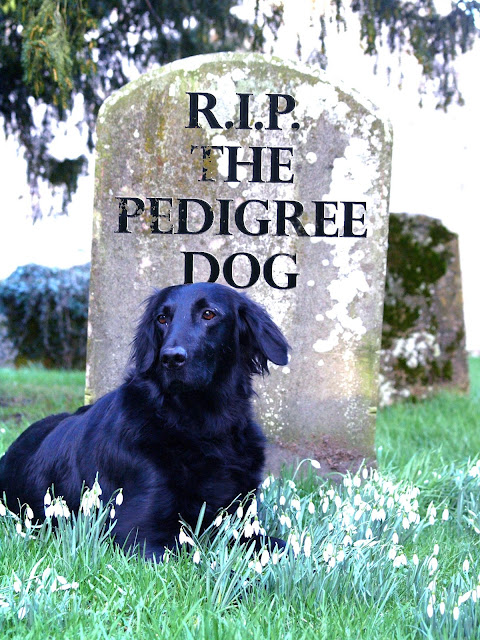 Three weeks ago, APGAW (Associate Parliamentary Group for Animal Welfare ) published an update to its damning 2009 report into pedigree dogs. (Link to both reports here).

It found, like Pedigree Dogs Exposed - Three Years On, that there had been some progress, but that there was more to be done. It also made several specific suggestions for further improvements by way of an Action Plan.  This week's Dog World features the KC's response, which systemtically trashes most of APGAW's suggestions.

There is also a lot of whinging about how unfair it is that KC breeders are being picked out in this way with so many unregulated breeders getting off scot-free.  I have never been able to understand this argument - a bit like arguing that a VW dealership should not have to provide a quality service because there are so many mickey-mouse garages providing a sub-standard product. You know, you really can't maintain that your "primary objective is the general improvement of dogs" and then complain when someone calls you to account on it.

Now, in truth, I didn't agree with all of APGAW's points, and thought the KC response to some were reasonable. APGAW, for instance, recommended that all dogs were health-checked before they entered the show-ring and I don't think that's practicable. And it also recommended that any breeder that produces three or more litters a year should be licensed (it's currently five or more) and I think that is both overkill and unworkable.

But the KC's resistance to APGAW's concern that the breed standard changes have not gone far enough was derisible: Dog World reported that the KC says that "it should be remembered that a breed Standard influences only those who breed pedigree dogs under the KC’s umbrella, and therefore changes to the Standards would have no impact on those who breed irresponsibly ‘as they have no relevance to this sector of the dog breeding community".

And there was one that made my jaw hit the floor - the KC's response to this section of the APGAW update:

There was also a lot of support for a limit on the number of matings permitted for each sire to allow registration. Currently the KC has a limit of 4 litters per bitch but no limits on sires. Other organisations feel there should be some sort of upper limit set even if it starts at a high number to prevent reducing the gene pool. The KC is wary of doing this as its view is that if the sire has been health checked and can produce disease free offspring it is better that it be allowed to continue siring rather than unhealthy sires being used. There is currently work being done on this, on a breed by breed basis, to ensure that if a limit was to be put in place it would be done based on scientific information to ensure it does not worsen any genetic disease issues. This work should be expedited to prevent the overuse of specific highly sought after sires that risk shrinking the gene pool further as health checking a sire will not detect recessive genes that may only become apparent once he has bred with certain bitches.


Now of course it isn't just APGAW and its respondents that have expressed concern about popular sires. It's just about every geneticist/conservation biologist on the planet. The need for some limits is a complete no-brainer.

So what was the KC's response?

"We would not support the suggested limit on the number of matings permitted for each sire to allow registration, as we maintain there is no reason why sires who have been health checked and can produce disease free offspring should be restricted from breeding.”

For goodness sake. Have you understood nothing about why popular sires are such a huge problem? Have you really just sat there and either not read the science or have you made a conscious decison to wilfully and irresponsibly ignore it? Do you not understand that the overuse of popular sires is one of the main reasons that some breeds are in so much trouble? Have you not - actually - read what you yourselves (or more likely the AHT on behalf of the KC) have written on Mate Select:

"Inbreeding arises in small, genetically isolated or closed populations, like pedigree breeds, because all members of the breed trace back to a small number of founders and over the generations they become more and more related to each other. Inbreeding thus accumulates over time and this is a natural, unavoidable, process in closed populations. Certain events such as genetic bottlenecks and selection can, however, accelerate the rate of inbreeding. Bottlenecks occur when a limited number of individuals contribute to future generations, for example, popular sires will have more offspring than other individuals and will consequently have a higher chance of contributing their genes to subsequent generations."  (my bolding)

Love the implication here, btw,  that because inbreeding is inevitable in isolated or closed population that it is somehow "natural" and "unavoidable" in dogs. It isn't. We've foisted closed gene pools on them; an entirely manmade construct. Inbreeding is something nature does its best to avoid or mitigate; the whole bleedin' basis of sexual selection, in fact. And you don't need to do it in dogs to maintain distinct breeds.

As reported recently in Dog World, KC Chairman Steve Dean admitted that the Club was under pressure to introduce limits and in the April issue of the Kennel Gazette had asked the breed clubs for their views on double matings - where two sires are used - as a means of maintaining genetic diversity. This is a technique already used by some breeders in small breeds and is certainly worth exploring. So to come out now with such nonsensical resistance is deeply depressing.

Let me spell it out again:


It is almost impossible today to find a Flatcoat pedigree free of Shargleam Blackcap, who won Crufts in 1980. He had 252 puppies from 47 litters - a huge amount in what was then a small breed, leading to a lot of inbreeding in subsequent generations  - a combination that scientists believe has very likely contributed to the very high rate of cancer in the breed (cancer, of course is an immune problem).

As we showed in the sequel to Pedigree Dogs Exposed, the over-use of one top Boxer (894 puppies), combined with a lot of inbreeding, has very likely contributed to the spread of juvenile kidney disease in the breed.

Top GSD Zamp vom Thermados, the 2006 Sieger and BOB at Crufts in 2008, sired close on two thousand puppies before he died aged 8 of causes still undisclosed by his owners. His progeny currently flood the UK show scene.  The rumour is that Zamp died of bloat - a condition that is thought to be at least partly genetic. If true, you can expect bloat to feature as a more significant cause of death in the breed from now on.

Hungargunn Bear It'n Mind - "Yogi", the Hungarian Viszla that won Crufts in 2010 - sired over 500 puppies in a five year period - more than 10 per cent of Viszla pups registered during that period.  Yogi appears to be healthy, but the point is that if one dog sires too many puppies, it is almost impossible not to inbreed subsequently, with all the problems that this cause.

Bottom line, the Kennel Club urgently needs to revise its policy regarding popular sires and to start introducing both some broad guidelines and some breed-specific limits now. The FCI has had some measures in place for some time - one that would have only allowed Yogi to sire half the number of puppies that he did. And there are some kennel clubs (eg Finland and Sweden) that are particuarly proactive on this, both in exploring limits that go beyond the FCI's and in encouraging their breed clubs to introduce breed-specific limits. I also believe that many UK breeders do now understand why popular sires are a problem and would be happy to consider limits.

Honestly, to give out the message that there is nothing wrong in allowing a top dog to sire hundreds - and sometimes thousands - of puppies, has me shaking my head in total despair.