PDE blog - over a million pageviews

I started this blog in November 2010 and today,  243 posts and 8955 comments later, the blog has passed the million pageviews milestone. Amazing!

To mark the occasion, here's a snapshot of the statistics so far - audience, traffic sources, most popular posts and so on (click to enlarge). Interestingly, although the first screengrab below shows that overall UK visitors outnumber US visitors, in recent months, US visitors have outnumbered UK visitors.  This month for instance, the blog has seen 18,000 American visitors compared to 16,000 from the UK.

Thank you to everyone who has contributed - in agreement or not. You have all helped keep the issue alive and debated, something which was always, and still is, the aim of the blog.

I have learned a lot along the way and hope others have, too.

Ah, and apologies for the lack of posts recently. I have been particularly busy with other stuff... but have a host of half-written posts waiting to be finished and uploaded, including posts on the Swedish Dog Health Workshop, two interesting developments from the Dog Advisory Council, the new voice of the Canine Alliance, and why some DNA tests should come with a health warning...

Here's to the next million! 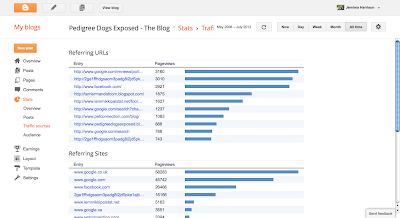 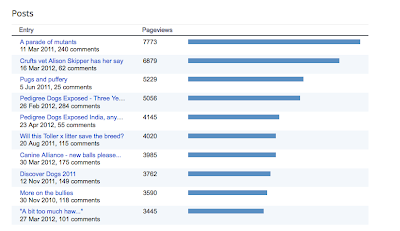 Posted by Jemima Harrison at 17:01