Based on the studies already out there, we stated in Pedigree Dogs Exposed that the average mutt lives longer than the average purebred. It caused a furore - and still, today, the dog fora are full of breeders stating categorically that it this a myth. I've discovered that it's pointless to provide a long list of references which show that they are wrong. They simply won't believe it.

But if the preliminary results from VetCompass  - the UK's amazing new veterinary surveillance scheme -  are borne out, it will be much harder for breeders to maintain that purebred dogs on the whole live longer than mutts. Based on death-data for nearly 5,000 UK dogs,  it found that, overall, crossbreeds live "significantly" longer than purebreds with only the Border Collie and Springer Spaniel living longer according to the data (but with the difference so small the researchers say it is not statistically significant). (Download pdf of the poster here)

Here's the figure showing the most popular breeds. 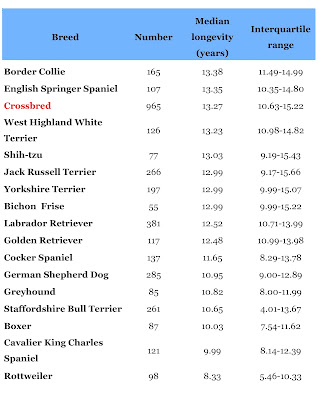 Now there are limitations to this data - most critically, perhaps, that the crossbreed data does not split the dogs into weight categories. This is important because we know that big dogs live less long (on average) than small ones.  Previous studies that have split the dogs on weight have found that size-for-size, crossbreeds still live longer but that 1.22 years  gap could be skewed either way if small or large dogs are over-represented in either the crossbreed or purebred category.

But the weight data is available because VetCompass "mines" its information (anonymously) from an increasing number of UK veterinary practices and they, of course, do record weight. When I broached the issue with Dan O'Neill from VetCompass, he said that the full analysis of the data with this weight-variable included is in progress.

The study also found that being neutered was associated with increased longevity - although the reasons for this are unknown. (It could be, for instance, that neutered dogs are less likely to be euthanised for behavioural issues rather than that being neutered is protective disease-wise or perhaps owners who neuter their dogs just look after them better.)  And, extremely interestingly, the study found that insured dogs live less long than non-insured dogs.  This sounds kinda counter-intuitive - and wondered if it might be due to increased veterinary intervention having the opposite effect to the one desired. But Vet Compass's Dan O'Neill warns me against confusing association with causality. "Perhaps people insure the dogs that are likely to have problems and don't insure or let lapse those that are healthy," explains Dan. "Or perhaps better welfare standard come from euthanasia  - so shorter relative longevity -  rather than letting animals live to the bitter end which may result in longer longevity but less welfare."

This preliminary data from VetCompass - which has now enrolled over 250,000 small animals in the UK, including over 125,000 dogs - reveals how incredibly powerful this kind of veterinary surveillance is going to be in answering questions about dog health more definitively than has ever been possible before.

The Kennel Club too, has woken up to its potential and the KC's Charitable Trust has recently committed funding to a study to look at the health of KC registered dogs - as opposed, presumably, to non-KC purebreds and crossbreeds.  The results of that looks set to dispel - or confirm - some long-held beliefs.

In the meantime, just for fun, I've compared the above VetCompass data with the longevity data from the KC's 2004 health survey ("Methods and mortality results of a health survey of purebred dogs in the UK", VJ Adams et al, JSAP 2010) for those breeds for which the data is available (which excludes Jack Russells as they are not a recognised KC breed and German Shepherds on account that they never sent back any survey returns to the KC...). It makes interesting reading. 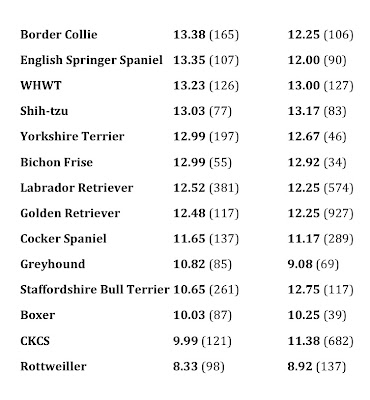 Overall, I'm surprised at how closely matched they are because the KC survey relied on breeder/owner reports and, traditionally, self-reporting introduces bias. (Kelly Cassidy found, for instance, that owners often overestimated how old their dogs were when they die - see link here).  Since the vet data is more objective, it looks like the KC survey had limited bias in its responses - or perhaps the bias cancelled itself out.  My concern about the KC survey was always that it might have painted an overly-rosy picture given that the survey forms went out to just breed clubs which might have a vested interest in downplaying health concerns. Conversely, I know many breeders believe that only those who have had dogs with problems are much more likely to complete a health survey.

Nevertheless, there are a few notable differences between the VetCompass and the KC survey data, which would seem to relate to the fact that the VetCompass data comprises the more generalised purebred population. For instance, we see that the KC-registered Border Collie, Springer  and Greyhound all live a year less long than the general population - perhaps reflecting increased longevity in the working dog?  Conversely, the KC-registered Staffie and Cavalier King Charles Spaniel live a whopping two years longer than the general population. I would guess that the Staffie difference might suggest better temperament in the KC-registered dogs, while the CKCS difference could relate to the numbers of puppy-farmed Cavaliers outside of the KC population.

Posted by Jemima Harrison at 15:08