Pekes - is this really true?

I was sent the top picture (and the ones below) of vintage Pekes a few days ago.  They are from Country Life Illustrated dated 16th September, 1899, and they are of Pekes owned by Lady Blanche Gordon Lennox who bred the first Pekingese champion in the UK, Goodwood Lo. "They illustrate this breed before it was ruined," says my correspondent, a breeder not quite brave enough to allow me to publish his name, who says he has given up trying to breed a healthy Peke and is instead focusing on Tibetan Spaniels - which, of course, look very like the vintage Pekes. "They are my pride and joy... so strong, agile and strong."

As you can see, the 1899 Pekes have a bit of muzzle, noticeably wider nostrils than many modern Pekes, much less coat and normal-sized eyes which are less vulnerable to injury than in today's version of the breed which has huge eyes in such shallow eye sockets that under pressure they can sometimes pop out.

"It is about time, after the 20th century when the breeders through selection made their dog muzzles non existent because of fashion and competition, that Pekes and Pugs get the muzzles back that so rightly belong to them," says my correspondent. " I have every book published about Pekingese, and in the beginning of the1900, the breeders advertised their stud dogs saying that they sired progeny with flat faces, they decided then this was a virtue without realising the sad consequences it was going to result in."

Of course, the above health problems are all well-known. But my correspondent then told me something I didn't know about the modern Peke that had me shaking my head in despair.  He said that the modern Peke has such a large head on such a short neck that they are unable to get round to clean their nether regions - or help with their puppies as they are being born.  I went back to ask for more info and back came this reply:

"Think about it... a thickset little Peke bitch in labour with a flat face, hardly no neck and quite a bit of thick coat, so very little flexibility left there, very difficult to turn around and reach. How can they get to their vagina to clean themselves or welcome a puppy? I'm afraid that this can be quite common. Very, very few newborn puppies, if any, would survive if the owner weren't there to assist, open the membranes etc. The bitches don't care very much when the pups are born. It is a bit afterwards they can realise their responsibility as mums. Besides, even if mine were considered quite "plain" and I had my soundness ambitions, almost every second whelping resulted in a c-section which was very depressing. This is my experience. Of course Jemima, people whelp their bitches at home and would never dream of airing such problems.

"They used to say that Pekes are little lion dogs, but no lion is heavy in front and light behind - it's just the mane. The Peke connoisseurs want them pear shaped. The Pekingese themselves are lovely, it is just a pity that they have made them prisoners in their own bodies."

"In contrast, the bitches of my Tibetan Spaniel litters  have started to clean the puppies before they were fully born.

So how common is this, really? Do all Pekes struggle in this respect - or is this breeder's experience unusual? 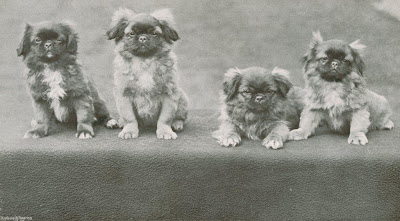 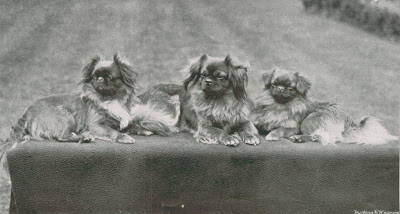 Posted by Jemima Harrison at 09:15