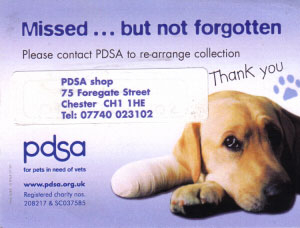 I don't know how current the above poster is, but if the PDSA wants to avoid a charge of hypocrisy, it will have to remove pictures of purebred dogs from its begging literature. From next month, this lovely-looking Labrador may not get the injury to its paw treated by a PDSA vet.

The People's Dispensary for Sick Animals (PDSA) is a charity that helps those who can't afford veterinary treatment. It will currently register and treat up to three pets per eligible owner.  But, from next month, only one of these can be a pedigree dog or cat.

The move, claims the charity, is because treating pedigree pets consumes what it says is a "disproportionate" amount of its funds (currently around £50 million a year). "Sadly, pedigree pets often need high levels of veterinary care due to inherited illnesses and breed related conditions as a result of irresponsible breeding associated with certain pedigree matings," explains the charity on its website.

The charity has seen an astonising 50 per cent increase in demand for its veterinary services in the past five years alone, so no wonder something had to give.  It believes that the new rules will allow it to treat more dogs overall.

But is this fair?

The PDSA's Facebook page has been inundated with complaints from angry breeders and owners and they are also howling big-time on the dog fora.  Some are even calling the move "racist" - more than a little ironic given that it is essentially racist breeding practices (the segregation of breeds genetically and a disdain for mixed breeds) that have resulted in the serious disease burden in pedigree dogs.

And as if it is the PDSA's fault that they're sick, eh? As if it was the PDSA that bred them with life-impairing flat faces or blithely ignored the evidence in front of their own eyes and let things get to the stage where the very dogs that may be in the most need may have to suffer even more.

So perhaps the PDSA should  allow some breeds and not others?  The answer is that for every organisation it's easier and cheaper to operate on the bigger law of averages  - in much the same way as insurance premiums are set. You might be the best 18-year-old Ferrari driver in the world, but it ain't gonna cut much ice with a car insurance company. They know that, on average, if you're 18 and drive a Ferrari, the chances of making it from one January to the next without incident are slim.

I do not believe there is PDSA conspiracy here; the charity is not being driven by some purebred-dog-hating agenda. It is simply saying that in a world where money is tight that it has to make the most of its resources.

So do I support the move?

Nope. I think it stinks. And for the following reasons:

• if we accept that pedigree dogs are sicker than mutts, the PDSA is turning away the dogs most in need

• dogs present to vets for all kinds of reasons entirely unrelated to their breeding.

• the new policy could mean that a responsibly-bred Labrador that has been hit by a car won't be treated (beyond the emergency care that all vets are duty-bound to provide); whereas the poorly-bred designer crossbreed with an inherited disease that could have been prevented if its get-quick-merchant breeder had bothered to do the necessary tests will qualify for care.

• the PDSA says that it will be the arbiter of whether or not a dog is a particular breed-type and therefore ineligible. Woe betide, then,  if you have a cross that looks very like one of its parent breeds.

On Friday, I asked the PDSA some questions. They included:

• How good/strong is your data that pedigrees cost more?

• Can you be more specific about this data? How much are pedigree dogs and cats costing the PDSA compared to crossbreeds/moggies?

• you are the largest private employer of vet surgeons and nurses in the UK – are they 100%  supportive of this move?

• not all breeds are unhealthy - indeed the scientific data shows that some breeds are, on average, healthier than crossbreeds. Surely this is unfair discrimination?

• you say that "91% of PDSA donors and supporters said that we are right to be concerned about the numbers and types of pets some people are acquiring and presenting for charitable treatment, of which 88% said they would support the change in our policy."

How many were polled and how was the poll worded?

And here is their reply, in full:

PDSA’s eligibility criteria needed to change in response to a shift in ownership behaviour with regard to the number and types of pets being presented at our hospitals and our concern for their wellbeing.  By ignoring the type and number of pets that owners acquire, we are in conflict with our own Pet Health messages in which we actively promote careful consideration before taking on a pet because of the responsibilities involved. Limiting the number of pedigree pets that can be registered, ensures a fair and appropriate allocation of the charity’s finite resources.

We are not discriminating against pedigrees, however we have to address the increasing numbers of multiple pedigree pets being presented at our hospitals.  Sadly, pedigree pets often need higher levels of veterinary care due to inherited illnesses and breed related conditions. This inevitably puts an increased pressure on our resources as our experience shows that on average pedigree dogs and pedigree cats do cost more than their crossbreed counterparts, for veterinary care and for them to remain healthy.

However, in some cases, owners with multiple pedigree pets that are in need of long–term treatment will still receive care for their second or third pedigree pets as long as they continue to be eligible. We have ensured that there is as much support for the small number of affected owners as possible; this includes a transitional period meaning some of those affected clients will have up to two years before the policy takes full effect.

Our policy change has been carefully considered based on fact and evidence gathered from our network of 49 hospitals, views of the veterinary profession, PDSA staff, clients and supporters. The change has been communicated to key partner organisations.

Any change in policy invariably gives rise to differences in opinion. However, we welcome any debate around animal welfare whether that involves pedigree breeds or crossbreeds. Reaction to the policy change has shown a balance of opinions.

While we recognise that there is activity by many organisations to help improve the health and welfare of companion pets, be they pedigree or crossbreed, we feel PDSA has an integral and fundamental role to play in educating owners and prospective pet owners in responsible pet care.  We want to see more positive action to address the wellbeing of all UK pets. Indeed, the groundbreaking PDSA Animal Wellbeing (PAW) Report launched earlier this year, the biggest survey ever undertaken into pet health and welfare, highlighted that millions of UK pets could be suffering mentally and physically because their five key wellbeing needs are not being properly met. (www.pdsa.org.uk/pawreport)

Hmm. So, as you can see, the PDSA is either unable or unwilling to provide hard data to back up their change in policy - and it completely ignored my last question asking for the polling data.

I asked the Kennel Club what it thought of the PDSA's new policy and back came this reply:

Whilst we do not like to think of any dog going untreated, we fully understand the PDSA's desire to discourage multiple dog ownership if the owner cannot afford veterinary fees. However, if this is the principle on which the PDSA policy decision is based it makes no sense to discriminate between different types of dog, as of course cross breeds, mongrels and pure bred dogs can all get sick and require veterinary care.

In order to minimise the possibility of needing prolonged veterinary care throughout a pure bred dog's life, the Kennel Club encourages people to always buy from a Kennel Club Accredited Breeder, who will ensure that they give their dogs the appropriate health checks for their breed, so that they and their offspring stand the best chance of leading a healthy life. There are too many dogs that are being bought from back street breeders who put profit above the health and welfare of their dogs and this translates into expensive veterinary fees further down the line. We urge people to think carefully about whether they can afford a dog, of any type, before they buy.

I will not be remembered for agreeing with the Kennel Club on very much and the advice to always buy from a Kennel Club accredited breeder is, of course, a matter for debate given the continued failings of the Accredited Breeder Scheme.  But I agree with the KC that it makes no sense for the PDSA to discriminate between different types of dog - and particularly given that the PDSA says it wants to encourage responsible pet ownership and care.

How on earth does this policy do that when it penalises the owners of responsibly-bred purebred dogs while doing nothing to stem the tide of designer crossbreeds being bred for profit with no care?

It might mean that the PDSA could treat fewer pets overall but much fairer, surely, would be an across-the-board maximum of two pets per eligible owner (as opposed to the current three), whether pedigree or mutt?

I urge the PDSA to reconsider. But in the meantime, please don't stop supporting the charity (as some pedigree dog breeders are threatening).  I know there will be those that argue that refusing to donate might provoke a change in policy, but remember that the PDSA really does offer an absolute lifeline to dogs in desperate need and a drop in donations will mean that more will suffer.
Posted by Jemima Harrison at 16:07