New Chair of the Kennel Club... 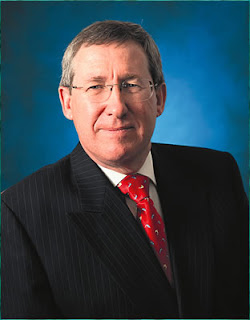 ...is Steve Dean, a not entirely unexpected choice.

As detailed in today's announcement from the Kennel Club, Dean is a long-time KC member and General Committee member - and also a breeder, exhibitor and judge of Border Terriers. He trained as a vet (although no longer practices other than as a show vet for the Kennel Club). He also has another big job as Chief Executive of the UK's Veterinary Medicines Directorate, which is currently receiving flak for refusing to recommend a three-year-vaccination schedule for dogs (for the core vaccines). This despite a good deal of evidence that yearly vaccination exposes your dog to an unnecessary risk of an adverse drug reaction (albeit a much smaller risk than the internet hysteria suggests) and may serve no purpose other than lining vets' pockets.

This controversy aside, Dean must seem a sensible choice given the increased scrutiny of pedigree dogs by the veterinary profession and no doubt his appointment will help in the KC's dealings with vets, hopefully not just as a more effective smokescreen.

Dean's utterings regarding health since Pedigree Dogs Exposed, as evidenced mainly in his weekly column for Dog World, have been somewhat schizophrenic. On the one hand we have comments like this:

"Having established why the opinions against pedigree dogs are flawed, we should remember negative media comment exists largely to give the crusader and pressure group a public profile and a political platform."

(Yep, obviously, it couldn't possibly be because there is, you know, actually a problem.)

On the other hand, here have been times in the past year that Dean has sounded more robust regarding health, and he was particulary strong recently regarding the show world's acceptance of lameness and poor eyes (see this post on Dean last November.)

It is significant in these post-PDE times that Dean's quotes in the KC press release are entirely focused on health and welfare.

"I am honoured to be elected as Chairman of the Kennel Club and to be given the opportunity to help improve the lives of dogs by ensuring that they live healthily and happily with responsible owners," he says. “I am aware of the scale of some of the challenges that we face but am excited about the opportunities that exist to help us make a real difference for dogs. I look forward to supporting and working with the millions of responsible dog breeders and owners that there are in this country, and to standing shoulder to shoulder with vets and other individuals and organisations, who are dedicated to improving the health and welfare of dogs.”

Dean's appointment certainly won't please the Elnett Revolutionists (breeders who have demanded the right to L'Orealise their dogs with conditioner, lacquer and chalk).  By all accounts, he doesn't have much time for this and, at the KC's recent AGM, Dean strongly countered claims by the Poodlists of the torture their poor dogs had to endure at the hands of a fine toothed-comb being used to extract some of the sticky muck from their coats for laboratory testing.

Of course, it's hard for me to forget that, after Pedigree Dogs Exposed, Dean went round telling people that we had withheld medication from Zak the boxer in PDE to get him to fit for our cameras.  Totally untrue, and when I emailed to tell him so, he was unapologetic and churlish in reply.

Bottom line, and despite those veterinary qualifications that some may feel are a reason for optimism, Dean has been with the Kennel Club a long time and is part of two Establishments (the KC and the veterinary profession) that have turned a blind eye to the problems for too long.  Will he now step up to the mark?

I hope to be pleasantly surprised.
Posted by Jemima Harrison at 17:42