Westminster: the good, the bad and the just plain silly

The surprise winner of this week's Westminster Dog Show - the US equivalent of Crufts - is a Deerhound called Hickory. She's a good-looking girl but as Pat Burns has pointed out over on The Daily Dose, sadly this is a breed whose health has dwindled along with the work that once kept the breed fit and functional. Hopefully, the win will not encourage people to go out and get one without doing a lot of research beforehand. The breed has a scarily small gene pool and, in common with other large breeds, suffers from a high rate of bone cancer.

Pat Burns, incidentally, has found this telling little gem in the archives from 1897: 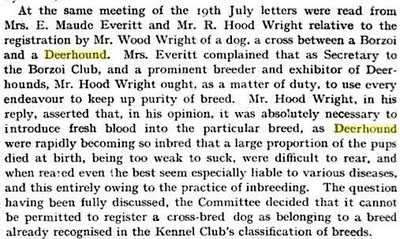 I don't know enough about the breed to know if there has been an outcross allowed since. Anyone?

But I was pleased to see the Deerhound win over toy breeds like the Pekingese.  At least she is recognisably a dog. And it was interesting to hear the Italian judge comment afterwards that Hickory reminded him of the deerhounds from 150 years ago that he saw pictures of when studying the standards. How wonderful that a judge thinks this way. Too often, the show world dismisses the historical versions of breeds as being inferior to the dogs of today, believing that the exaggerations that have been hewn by the show-ring are an improvement. It is rarely true.

So let's take a look. Here is the new Champ, Foxcliffe Hickory Wind 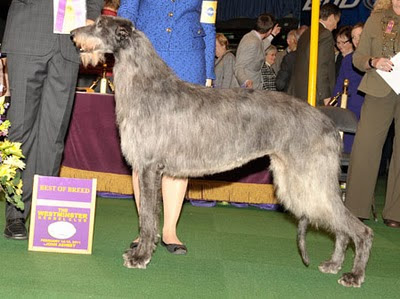 And here is a champ from 1917, chosen because he is fairly representative of dogs from the archive: 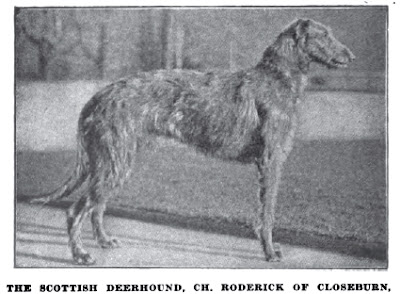 Clearly, there has been nothing like the exaggeration that has occurred in some breeds, although the 1917 dog is lighter and, proportionally, a little taller. To me, he is a better-looking, better-balanced dog. He has less rear-angulation, too,  something which the show-ring so often takes to extremes, believing - erroneously - that more is better.

On which note, here is the German Shepherd that won Best of Breed at Westminster, GCH Winsome's Love Remembears - compared to Norbert vom Kohlwald, a dog deemed good enough to win the Sieger two years running (in 1911 and 1912).  Poor old Norbert. He would not be recognised as a GSD today. 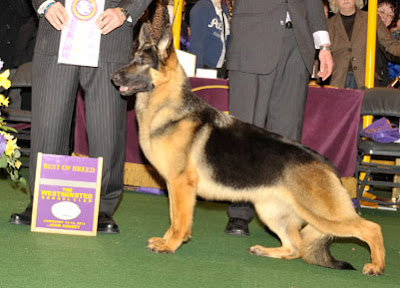 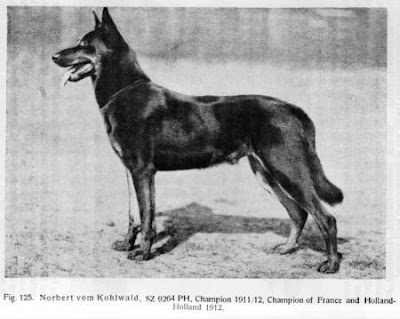 So there you have the good (-ish) in the Deerhound, and the bad (the GSD),  and now to the... well you be the judge. This is Kaltrav Carribean Cruise and he won Best Labrador at Westminster.

Here, to compare, is a 1938 version of the breed: Ch Cheverells Ben of Banchory

You see many dogs in the UK that still look like him - at least outside of the show-ring. It's only in America that they've turned this beautiful breed into such a blubber-fest.

And, finally, here's the just plain silly:
W-a-a-y too much coat on this rapunzel red to ever do the job this breed was developed to do (and that's after the scissors). Here, in contrast, is an American working-bred red setter - still to be found in some parts of the US  doing the job it was bred to do.
As the old saying goes... handsome is as handsome does.

Posted by Jemima Harrison at 23:51