Eleven years ago, I wrote a post featuring the Neapolitan Mastiffs at Crufts 2011. It highlighted the dogs in the ring that year - so horrendous that I headlined it "A Parade of Mutants".

The dog top-left above won Best of Breed that year - just heartbreaking. And the dog on the right won Best of Breed at Crufts today - Tommaso Goffredo's Taro.  It's a world of difference, isn't it? The dog on the right isn't perfect but oh boy he was sound on the move. The picture captures that this dog is comfortable in his own body; not the painfully-hunched bag of excess skin that won in 2011.

Of course it takes more than a gobby blog to effect change - but it WAS the spark in this breed.  It led to public outrage and the bad publicity made the Kennel Club wince. Breed reps were hauled over the coals by the Kennel Club after Crufts 2011 and told in no uncertain terms that the dogs had to improve. The following year, Crufts introduced vet checks.

That said, change can't happen if breeders don't step up to the mark - and that's what happened in Neapolitan Mastiffs. One breeder in particular, in fact -  former breed health rep, Kim Slater-Mafi whose husband Mateaki won in the ring today with Tomasso Goffredo's Taro, who is 4.5yrs old. 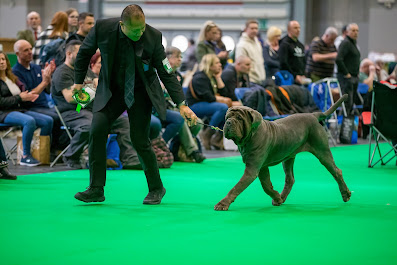 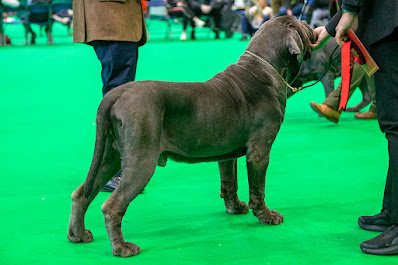 I salute you both  Although I would love you to go further ;-) .  Below, on the left, is your boy, photographed today; in glossy show condition, slobber-free, I can see that his eyes are not red raw as we've seen in the past and.. lovely nostrils!. But check out the Neapolitan Mastiff from the 1970s.  Leaving aside the cropped ears, the dog on the right has such a handsome, noble head. Less skin, cleaner face, better eyes. All the more imposing.

This morning, I put up a post on my campaign group CRUFFA asking people attending Crufts to send in pictures of dogs that catch their eye at this year's show - examples showing improvement and/or those where it is obvious improvement is still needed. I actually do this every year - and every year it provokes outrage from those who feel people should be able to exhibit their dogs at Crufts without me highlighting issues.   "Do your own dirty work and don't expect others to do it for you," wrote one commenter. " "How about you put your energy into helping the dogs in Ukraine?" asked another.

Bottom line, Crufts makes it clear that it is perfectly fine for members of the public to take photographs at Crufts and, as it happens,  a condition of entry for exhibitors is that they grant permission to be filmed/photographed for TV/press.

That said, the Crufts website does does include this extraordinary statement.

This is essentially saying that if you, say, got some footage of a judge whacking a dog or a Bulldog dropping dead in the ring (which very sadly happened one year), then you would not be allowed to publish it.  This is at best nonsense and at worst a clear attempt at censorship. Legally enforceable it is not.

Worse, it does the dogs themselves a disservice. Why did the Kennel Club (finally) act on the dreadful half-dog-half-frog German Shepherds? Because one particularly awful one won in 2016 and it got a LOT of publicity.

The footage of the dog moving was edited out of the TV coverage - censored by some Kennel Club hand - but I tracked down the unedited footage and published it here. It got over half a million hits and the resulting outcry finally led to the Kennel Club acting.  The GSD that won Best of Breed at Crufts today is night and day better than the 2016 winner (although there, too, still a way to go).

We all need outside scrutiny to keep us honest. And the dogs sound.