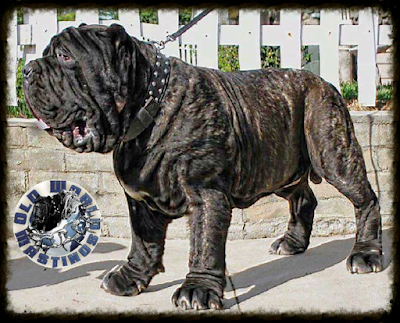 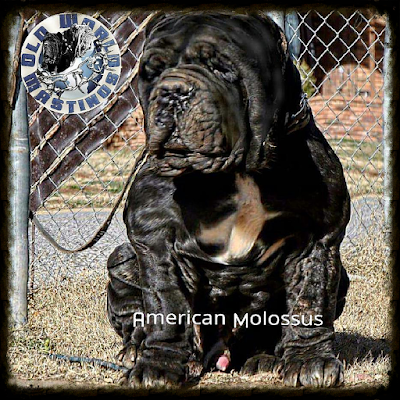 Because what the world needs right now is a dog that is bigger, wrinklier and more fearless than the current Neapolitan Mastiff!

Let's make a molossus a colossus!

Yep, let's take something that is already right-royally fucked up and make it more fucked-up!

Although as you can see from the second picture above (an artist's rendering apparently) this breed's creator will be sticking with a small penis, presumably in homage to his own.

It's the idea of an AKC Neapolitan Breeder, Marcus Curtis, who specialises in what he calls Old World Mastinos - essentially the most exaggerated Neapolitan Mastiffs you are ever likely to see. He  ships them all over the world to people who don't give a rat's ass about inflicting suffering on their dogs. Here's one fine example he shipped to New Zealand. 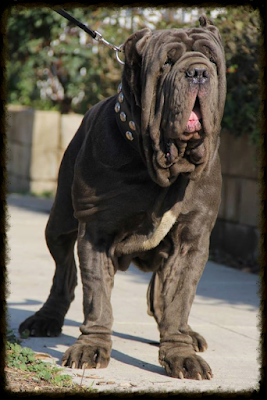 And now he wants to take it further.

The American Molossus is a super sized Neapolitan Mastiff and the true version of the real Molossus of antiquity. Get ready to own both the greatest dog and guardian but to own a true throwback relic from the ancient past. A beast, a gargoyle an American Molossus.

Here's their "creator", brimming with self-importance, only vaguely cognisant with history and with clearly not the slightest care about what it would be like to be a dog like this, talking about how he's so excited about his new breed that he can barely sleep.

If you suffer from hypertension, it might be better to not watch. What got me, too, is that it's clear he's had a lot of flak from the purebred community about crossbreeding. Hopefully one or two also mentioned that intentionally breeding a dog to look like this is cruelty - although if the criticism came from Neapolitan Mastiff breeders, maybe not.

Posted by Jemima Harrison at 09:43