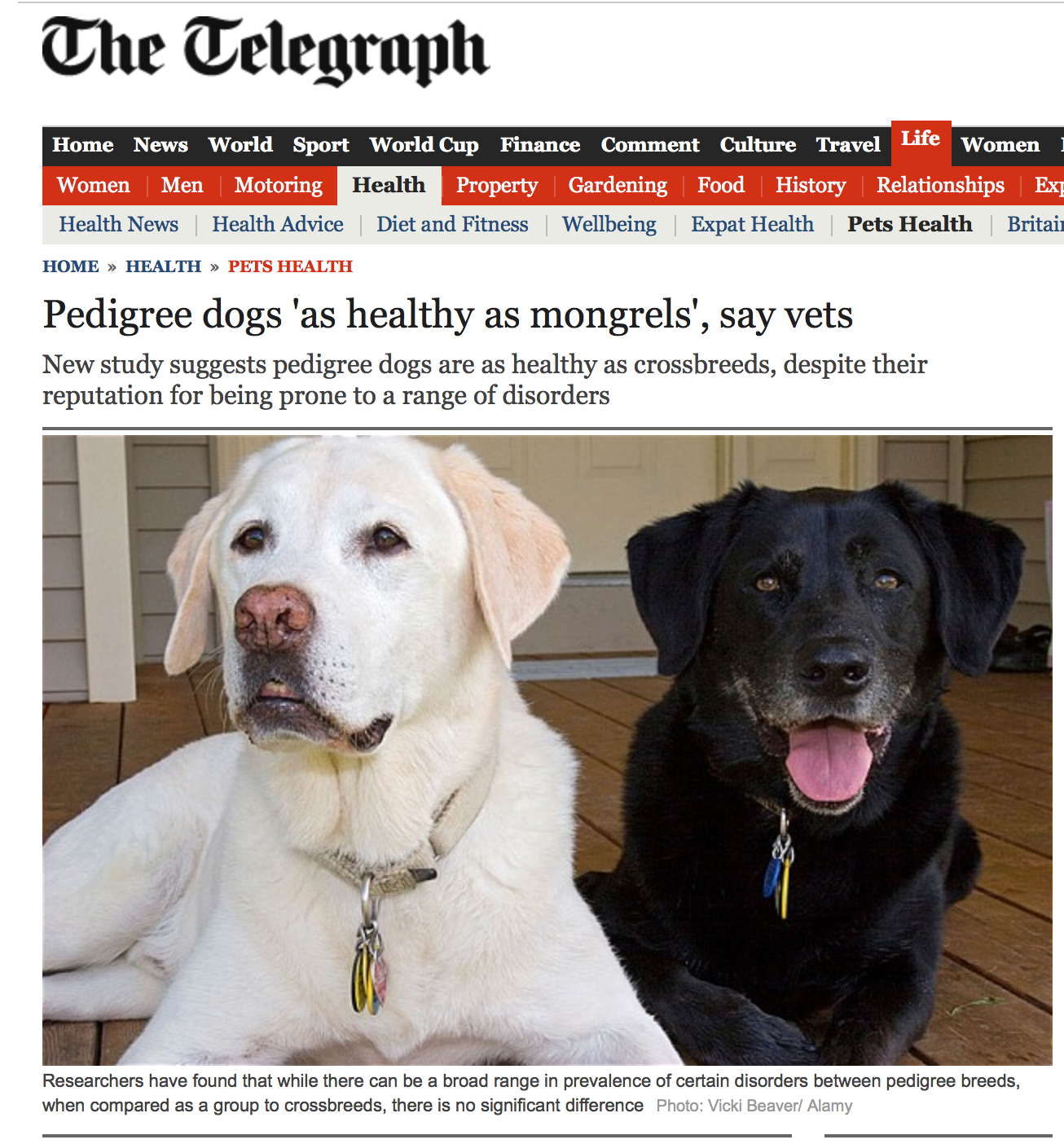 This headline, when it appeared in April 2014, was the best bit of news the purebred dog world had received since Pedigree Dogs Exposed.

It was a report on a new paper from the terrific team at VetCompass looking at the most common disorders in UK dogs. (You can read the whole paper here).

The Telegraph article quoted the paper's main author, Dan O'Neill: “My hypotheses was that crossbreeds would have a lower prevalence of common disorders than purebreds," he told them. "But the overwhelming evidence for that has not been proved."

The Kennel Club was delighted. “The view of the researchers, which we would heartily endorse, is that crossbreeds are not healthier than purebreds," said the KC's Caroline Kisko, who went on to claim: “Over time, we would expect purebreds to go ahead of crossbreeds, because of the amount of research going on into their pedigrees, helping you to get away from health problems.”

As you might imagine, the dog press fell on the report like a pack of hungry wolves.  This from Lee Connor in Dog World (in an article entitled "Don't let untruths go unchallenged") was typical.


"So, that’s that then, the ‘hybrid vigour; lets mix it all up’ theory has been well and truly exploded. Can we now expect apologies from the BBC and from those who likened our breeders and our world to that of the Nazis and the Eugenics movement? Will we now get a big ‘I’m so very sorry, we were wrong’ from the celebrity vets and the RSPCA who have for over a decade championed the mongrel and the designer dog crosses as a healthier, more intelligent pet alternative to the purebred?

In the US,  Dog News claimed too that the paper debunked "the mother myth of them all". 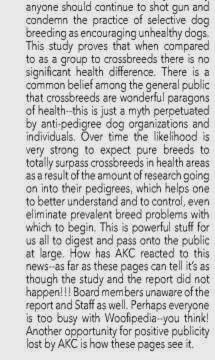 The new paper has even been mustered by Philippa Robinson from the Dog-ED initiative as evidence that the dog-breeding reports that followed Pedigree Dogs Exposed were unfair to the Kennel Club. (See that article here.)

But, of course, this is a classic case of wild over-interpretation by the purebred lobby desperate to counter the evidence that the way we breed dogs within the Kennel Club system is harmful to dogs.

Aha, but you would say that, wouldn't you?

Well yes, that would undoubtedly be my default - and that's because there is just so much evidence that reform is needed if we're going to keep our purebred dogs safe for the future. Nevertheless, having based my stance on evidence, I have got to be open to new evidence even if it doesn't concur with my world view.

So did this paper provide it?

Let me walk you through it and you can make up your own minds.

VetCompass is a UK veterinary surveillance scheme set-up after Pedigree Dogs Exposed - a joint initiative between the Royal Veterinary College and the University of Sydney. Today it pulls data from 100 primary care veterinary practices in the UK representing around 150,000 dogs.

As such, it is an amazing epidemiological resource. No bones about it, you can trust the data.


What was this paper all about?

The paper looked at a random sample of 3,884 dogs to establish the 20 most common disorders in dogs. Here's what it found. 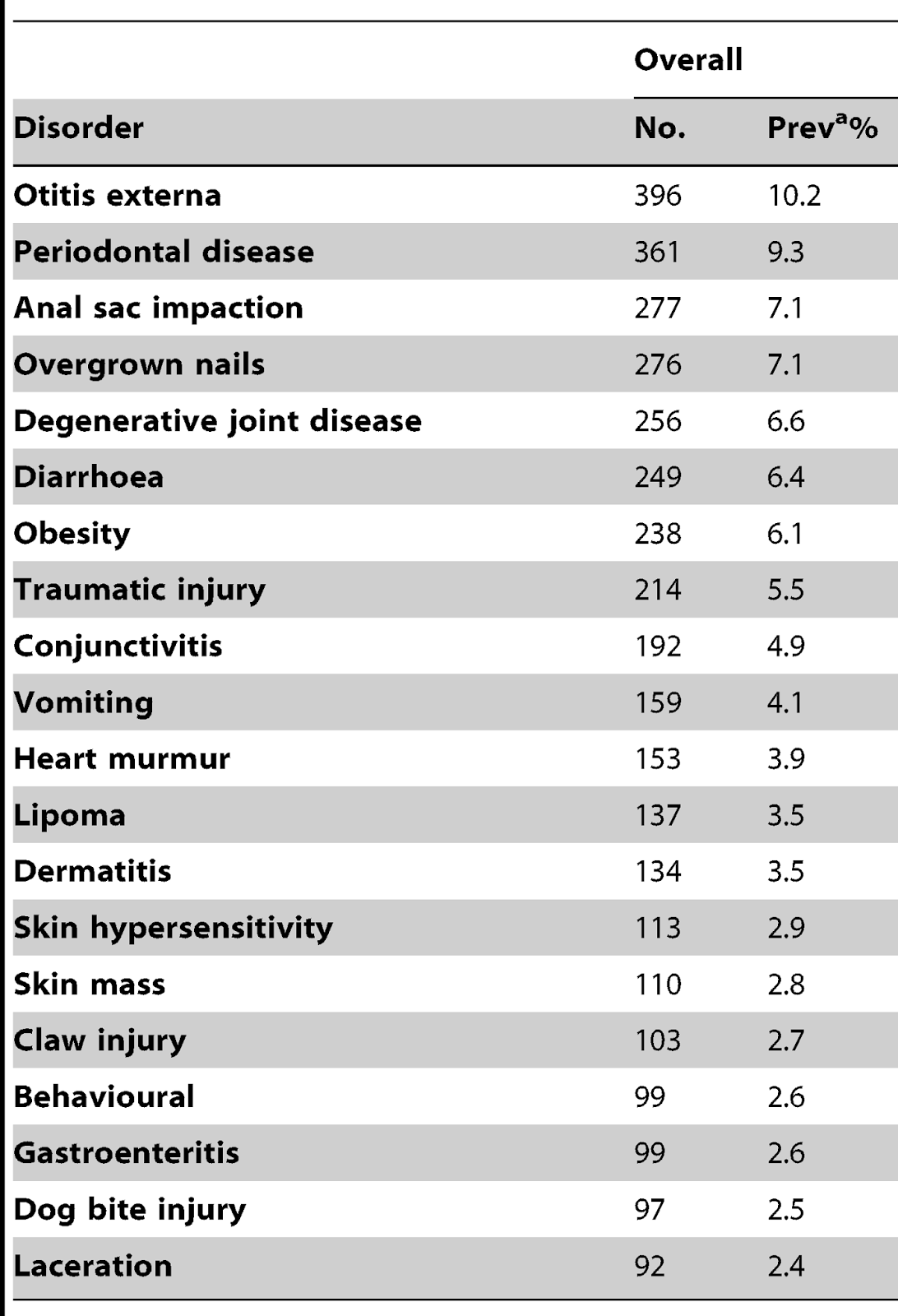 So, overall, crossbreeds were found to be healthier (albeit not overwhelmingly healthier). And yet, inexplicably, the headlines claimed that the paper showed that purebred dogs were just as healthy as mutts and that hybrid vigour was a myth.

What the press picked up on was the fact that the authors said they had hypothesised that there would be a more significant difference.

But, actually, it is pretty obvious why there wasn't.

Take a look at that list of disorders again.

As the paper states: "The most prevalent disorders identified in dogs within the current study were complex disorders that have multiple interacting environmental and genetic casual factors."

In fact, some of these conditions don't have much if any genetic component (overgrown nails/obesity/diarrhoea/obesity/laceration/dog bite injury etc). And of the ones that do, most have a moderate to high environmental component.

There is likely to be a genetically-mediated breed predisposition to periodontal disease, for instance - but we also know that diet and dental hygiene plays a huge role in whether or not dogs' teeth rot. Even with degenerative joint disease - which we know is under enough genetic control for selection against it to be reasonably successful - exercise, diet and traumatic injury play their part.

The condition where the greatest difference was seen was "skin mass". Here, crossbreeds were much less likely to suffer than purebred dogs (more than 50 per less in fact - 1.5% as opposed to 3.2%) but given that the category includes much more than just cancer (abscesses, granulomas, cysts and other indeterminate skin lumps too) it's not really possible to make much of a claim either way for that, either.

Clearly, what the paper showed is that the most common disorders in dogs are pretty common across the board (although there were a few interesting breed differences - see below). No big surprise. Dogs are dogs are dogs - fed by overindulgent owners who don't know how to trim nails... prone to cutting their pads on glass.. likely to catch bugs or scavenge something disgusting that will make them vomit.

The authors, too, are concerned about the interpretation of their paper. To help counter the misreporting, they have just produced an infographic aimed at the hard-of-reading.

So what did the paper say about hybrid vigour?

Hybrid vigour- or heterosis - is a phenomenon that occurs when you cross two inbred strains of plants and animals to create offspring that are often superior than either parent - more robust, bigger, stronger, more fertile, more fecund and longer-lived.

None of these traits was measured in this paper. It did not look at the severity or duration of disease, for instance, or at survival times for the more serious conditions .

In fact, while hybrid vigour has been very well documented generally, it hasn't been studied much in dogs - and neither has what many refer to as its opposite: inbreeding depression. No one, for instance, has looked at what happens to litter sizes or neonate mortality as inbreeding increases (although there is some anecdotal data).

But there is some longevity data - and most recently from the same team behind the disorders paper paper.  Last December,  VetCompass published a paper looking at longevity and mortality of owned dogs in England and what it found was unequivocal. Although Miniature Poodles, Border Collies and Jack Russells lived the longest, overall, crossbreeds lived 1.1 years longer than purebreds - around 10 per cent longer. This echoes most other studies.

The authors concluded: "The findings... support the concept of hybrid vigour in dogs" - as noted on another infographic they've just released. 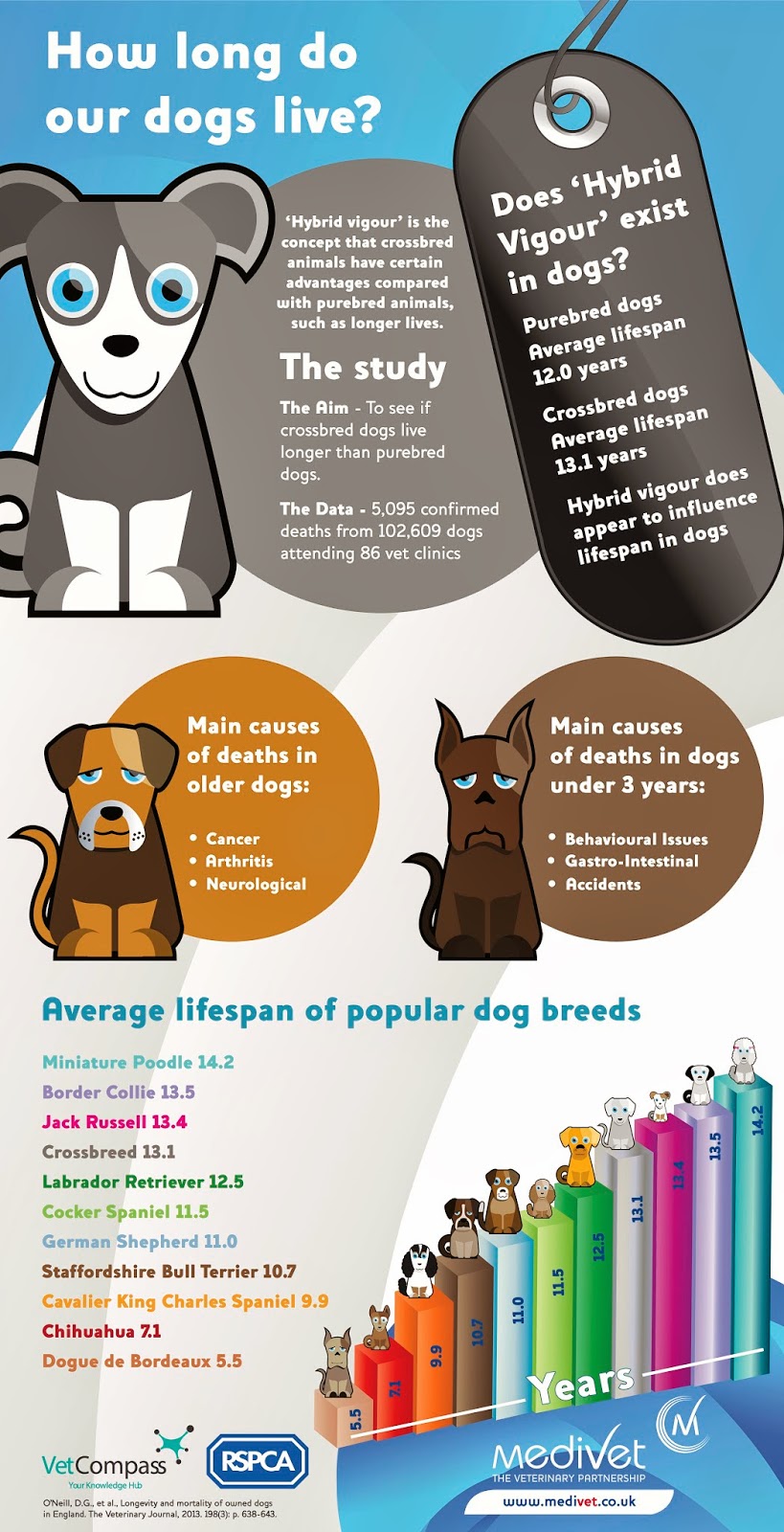 This is a good paper in many respects. It highlights, for instance, just how common ear infections are in dogs and it suggests that we we should expend more energy working on the 'less sexy' disorders because of their high prevalence.

But did it tell us that purebreds are "as healthy as crossbreeds" - or that hybrid vigour is a myth?

Most importantly, the over-arching scandal in dogs remains the breed-specific disorders that plague individual breeds as a direct result of the way we breed dogs under the current Kennel Club system:

None of these conditions featured in the Top 20 Disorders list because they get lost in the numbers when you lump all breeds together.

But no one other than a fool would suggest that they don't matter because it turns out that - overall in dogs - the most common problem is an ear infection.

The authors stress that they think we would be better served looking at individual breeds rather than getting too hung up on the crossbreed v purebred debate - and I agree, although only partly. And that's because the evidence that crossbreeds live longer and are healthier overall (even if only marginally when it comes to the most common disorders) is important.

Because understanding why - despite all that selection in purebreds, despite all that health-testing - is critical to improving purebred dog health, to safeguarding the breeds we love for the future.
Posted by Jemima Harrison at 18:07