Lewis Hamilton is an idiot 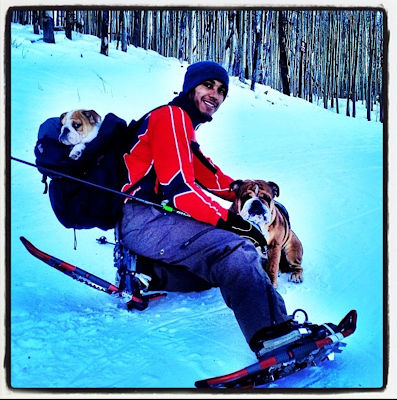 First for buying a Bulldog. Second, for buying another one. Third, for not recognising that one of them is in trouble.

Given how dangerous it is to hurtle - pointlessly if lucratively - round a track at 200mph, I guess it's probably better to not think about stuff much. But Lewis Hamilton's comments on  Instagram two days ago display breathtaking ignorance.

On a snowy New Year break with his Bulldogs Roscoe and Coco, the Formula 1 driver wrote:

"Today, I went hiking up the mountain. Thought I'd take the dogs. Roscoe was fine but Coco, she walks about 20 meters & sits down. She doesn't want to go anywhere unless she's carried. Lazy ass bulldog Lol so I put her in my backpack.....she literally snored the whole way up!!'

Mr Hamilton.... Coco is less than a year old. No dog of that age is ever "lazy".  Ever. And that snoring? It isn't snoring. She can't bloody breathe.

A pound to a dollar, Coco will be at the vets for a soft palate resection within the year.

Hamilton's other Bulldog, 14-month-old Roscoe looks quite the athlete body-wise - slim and fit and relatively long-legged. There are very few pix of him gasping either - good to see.

Nevertheless, four months ago, Roscoe almost died from pneumonia  a breed-related problem that is a direct result of the Bulldog's impaired respiratory system.

He recovered, but will never overcome the basic handicap of being born a Bulldog - something that Hamilton clearly thinks is cute and funny. Have a look at this:


It's clear from Hamilton's posts that he adores Roscoe and Coco.

He's in for a lot of heart-ache.
Posted by Jemima Harrison at 22:51