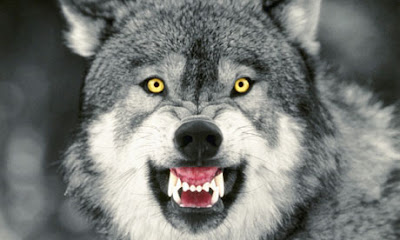 When we were making Pedigree Dogs Exposed, we filmed at the UK Wolf Conservancy Trust near Newbury. We were privileged to be able to film in one pack's enclosure  - under close supervision and with strict instructions on how to act in the wolves' company.

It was a beautiful, frosty early morning -  before the centre opened to the public. Having a young wolf lick your face is an electrifying experience. Every fibre of your body bows in acknowledgment that this is not a dog. Definitely not a dog.

But of course wolves and dogs share a common ancestor and are so close genetically that they can mate and produce fertile offspring.  Every revelation about wolves is of interest to canine genetics buffs because it helps inform our knowledge of/relationship with dogs. And wolves have been in the news this week.

Nature reports a spat between the different teams trying to nail the timing, place and manner of the split that led to the grey wolf on one branch of the evolutionary tree and the dog on the other.


"In recent months, three international teams have published papers comparing the genomes of dogs and wolves. On some matters — such as the types of genetic changes that make the two differ — the researchers are more or less in agreement. Yet the teams have all arrived at wildly different conclusions about the timing, location and basis for the reinvention of ferocious wolves as placid pooches. “It’s a sexy field,” says Greger Larson, an archaeogeneticist at the University of Durham, UK. He has won a £950,000 (US$1.5-million) grant to study dog domestication starting in October. “You’ve got a lot of big personalities, a lot of money, and people who want to get their Nature paper first.”

The upshot? Hopefully the competition will provide some answers. At the moment, depending on whom you believe, the domestication of the dog happened anywhere between 10,000 and 32,000 years ago.

Also this week, Christopher Landauer who runs the Border Wars blog has written about the Isle Royale wolves - once held up as an example of how inbred populations could thrive; now facing extinction.  Today, this once-proud population sits, cub-less, waiting to die - unless the decision is taken to intervene. It's nature (the wolves have become geographically isolated due in part to an ice-bridge failing to form) but still achingly sad.

"Inbreeding apologists in the dog world love invoking the notion that wolves inbreed all the time and are just fine and not harmed.  As is clear from the scientific evidence, this once common refrain is nothing more than an unsupported meme that is not backed up by empirical or observational evidence.

"Scientists are fighting against this misconception because it has major implications on the structure and success of wildlife conservancy programs.  Dog breeders should take note as these same principles are vital for the maintenance and rejuvenation of our breeds as well."

Posted by Jemima Harrison at 09:00