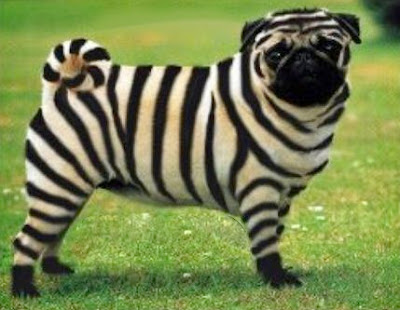 German scientists have succeeded in transplanting a key gene that codes for the zebra's stripes into a dog - to produce the world's first litter of striped pugs. The researchers say they have been inundated with requests to buy the transgenic animals, which will inevitably be a surefire hit with breeders and owners looking for something completely different.

It is the latest in a series of efforts to transplant genes into another species to dramatic effect, most famously the creation of mice that glow in the dark through the insertion of a gene that produces a protein that gives jellyfish a green fluorescence. The German researchers used the same technique to introduce the striping gene into pug embryos - a retrovirus, much like the one that causes AIDS, to deliver the gene into the cells and insert them into the dog genome.

The gene governs the switching on and off of melanocytes (pigment cells) - the process by which stripes are formed in the zebra.

The result was a litter of four pugs -  two males, two females - now a year old and all with distinctive striping.  Such is the demand for the animals that the team are repeating the experiment to help fund further research.

The pugs are, says lead researcher Frans Liebermop, genetically identical to any other pug, other than for the striping gene. And there may even be a real benefit to  pugs who are well-known for overheating... the zebra's stripes are thought to help the animal regulate its temperature by dissipating heat more effectively than solid colours.

In response to the news, a Kennel Club spokesperson said: "Genetically, these are provably pugs. If the benefit to the offspring could be proved, we would certainly consider allowing the registration of striped pugs - we are always looking for ways to improve dog health."

But it's unlikely to go down well with the purists. A couple of weeks ago, there was uproar on dog forums when this ad appeared on Pets4Homes asking £10,000 for the world's first chocolate and tan pug. Chocolate and tan is not a recognised colourway in pugs. In that case, though, it was almost certainly introduced by crossbreeding with another toy breed. 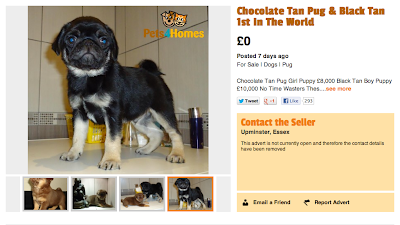 The German team, based at the April Täuschen Institute in Frankfurt, says their research will be published in a peer-reviewed journal later this year.
Posted by Jemima Harrison at 12:08