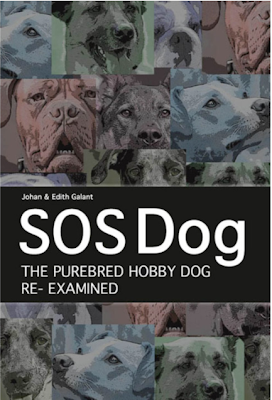 Earlier this year, Johan and Edith Gallant's careful - but critical -  examination of purebred dogs was pulled by its publisher Alpine.  The book has always sat uneasily in Alpine's catalogue of dog books celebrating individual breeds.

"In fact, a few months after Alpine published the book in 2008, they asked my parents if they would agree to withdraw the book," remembers the Gallants' daughter, Anne. "They explained that they had dog breeders threatening to no long publish with Alpine."

The Gallants refused and the book remained, rather quietly, on the Alpine catalogue until earlier this year when, with the airing of the sequel of Pedigree Dogs Exposed, the Gallants wrote to Alpine asking if they might like to re-market the book given the widespread interest in the issue.

Instead, and with no warning, the Gallants says that Alpine removed the book from its catalogue and when asked for an explanation, Alpine cited poor sales. Fair enough, of course, if it wasn't for the fact that Alpine was and is still marketing Johan Gallant's book on Giant Schnauzers, written 20 years ago, despite even fewer sales than SOS Dog.

The very disappointed Gallants wrote to Alpine asking for the remaining copies of the book and got what they say was a curt email back revealing that the publishers had "disposed of the inventory".

But there's good news... the book has been taken up by German publishers Kynos Verlag and there is now a Kindle edition available in both English and German on Amazon.

The book documents the Gallants' love affair with dogs - first Giant Schnauzers (Johan was a breeder and judge in his native South Africa) and then how observing native dogs began to shape their view of how we breed and raise dogs. It is a controversial but fascinating read - and I'm delighted it is now officially available again. There are also one or two back copies of the print edition still available on Amazon if you're quick.
Posted by Jemima Harrison at 22:09