First up, let me say that I have no time for the People for the Ethical Treatment for Animals (Peta) and am on the record calling them a bunch of crackpots.

Pedigree Dogs Exposed and this blog is all about animal welfare, not animal rights; about campaigning to ensure that pedigree dogs enjoy a healthier future not, as Peta wants, no future at all.

While PETA in the US is an undeniably powerful force, it hasn't amounted to much here in the UK - last year a group of earnest men and women dressed up in dog costumes and waving the odd poster outside Crufts.

The KC did get upset when Peta UK paid for an advertising site on a bus shelter in Birmingham close to the National Exhibition Centre to display this poster - but lost a bid to have it taken down. The Advertising Standards Authority (ASA) ruled that the ad was not offensive. 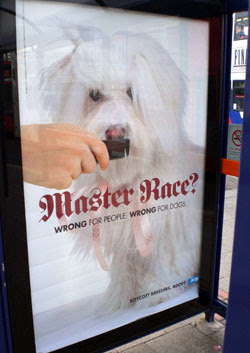 Of course many dog breeders would disagree. And so they're really not going to like this attempt to make the point that people should adopt a rescue dog than buy a pedigree pup.

I won't reproduce any images from the spoof website here as I suspect the KC has a strong legal case as regards the adulteration of their logo.

Although it does look like Peta UK might be behind it (they're using the same image that was used on the bus shelter), they claim they are not. So who is? Satirists or animal rights nut-jobs?

Pedigree Dogs Exposed is often accused of fueling the animal rights agenda and of course we were concerned that our message would be hijacked by animals rights extremists. But we never felt - and still don't - that this was a good enough reason to not make the points as strongly as we did in the film.  After all, no one thinks that because the RSPCA has highlighted the misery of battery-farmed hens that it endorses the bombing of the farms where caged birds are raised.

I'm sure I'll get a bit of stick for publicising this new website. But if it is animal rights activists behind it, it's good to know what your enemy is up to. This presents a strong case for rehoming a dog rather than buying one, something many ordinary people will think is perfectly reasonable. Don't be fooled though -many animal rights extremists like Peta want the eradication of the dog as a pet. They think it's enslavement.

Must tell that to the ones that are currently on my sofa, having dragged me out for a two-hour walk in the driving rain on Salisbury Plain this afternoon.
Posted by Jemima Harrison at 20:09