Not fridges. But still no excuse for selling any old crap 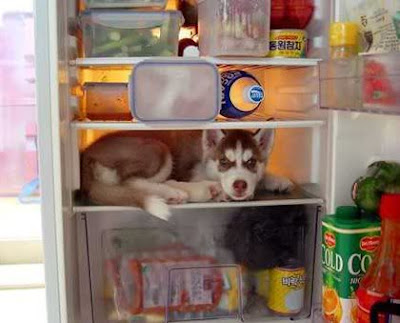 There was a meeting to discuss the dog breeding issue at the House of Commons last week, called by APGAW - the All Party Group for Animal Welfare. APGAW comprises a cross-party group of MPs which,  in the wake of Pedigree Dogs Exposed,  produced this report on Dog Breeding last November.  In it, the MPs gave the Kennel Club a year to get its house in order, pointing out that self-regulation is always preferable to legislation but not ruling out legislation if self-regulation didn't work.

So how has the KC done? Well there's been quite a bit of bark - with several announcements, and money and time spent on measures designed to tackle exaggerations and genetic problems - but nothing like enough bite.  I welcome KC initiatives like Breedwatch and Mate Select and better policing of the Accredited Breeder Scheme, but it is - as ever -  not what the KC is doing, it is what it is not doing.

Nowhere is this more true than the shameful state of affairs regarding general KC registration. Keeping your dogs in desperate conditions? No matter! Using a staple gun to "tack" your puppies' eyes yourself? Don't worry! Still using that champion sire despite the fact that he is carrying a deadly condition? That's OK - we'll still reigster the pups!  (These three examples sent to me in the last couple of days).

The KC will still register almost ANY puppy from ANY breeder on its general register (with a few caveats that do nothing to ensure that the pups are healthy or have been raised in good conditions).  The KC continues to issue pedigree certificates to the shittiest breeders producing deformed, diseased and occasionally dying dogs. And when challenged (as I and many others have done endlessly) the KC mantra is: "But our rules don't give us any option."

This is what the KC's Bill Lambert told me at the APGAW meeting on Tuesday, after I'd stood up and talked about the dreadful state of affairs in Sharp-peis.  I had taken with me a flyer that included this advert. 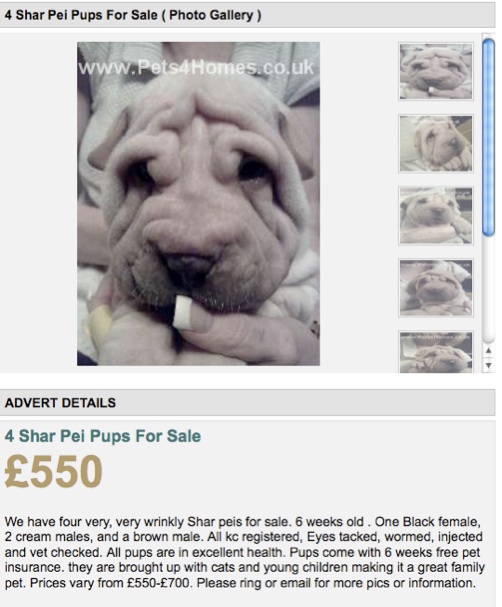 As you can see, the advert boasts: "We have four very, very wrinkly Shar peis for sale".  Bill assured me that the KC breed standard didn't require this amount of wrinkle, and that is true. But as you can see, these pups are KC-registered. "Don't you see that the KC registration legitimises their production?" I asked. Bill gave me that old KC chestnut about being able to influence/educate breeders if they remained under KC auspices. This is pure bull. The KC continues to take the registration fees from pet-breeders like this while doing absolutely nothing to influence/educate them.

We came to a bit of an impasse. Bill complained that I never say anything positive about the Kennel Club. This is not entirely true but I concede I am rarely more than lukewarm in any praise - because so much more needs to be done and because they still don't get how big the problem is and how much needs to change to put it right.

But I was feeling generous on Tuesday evening. "Bill," I said, "we might be at polar opposites on this, but perhaps we can take some comfort from the fact that we do both care about the dogs."

He looked at me. "I think that was probably true of you at the beginning. But now you're just...." He grimaced and left the sentence trailing.

Last time I try to be nice.

At the meeting, Sheila Crispin (Dog Advisory Council) made the point that there was a desperate need for the consumer to be better-educated about how to buy a healthy dog. She pointed out that people go out and buy a dog with less care than they'd put into buying a fridge. It's a point my friend Patrick Burns makes strongly too. They are both right and, indeed, I recently upset a pet owner when I suggested she needed to take a little bit of responsibility for deliberately choosing (as she admitted) the runt of the litter - a GSD pup that turned out to be a pituitary dwarf. (That's not to let the breeder off the hook, by the way - she should have known the pup was a dwarf.)

But, surely it's not unreasonable for puppy-buyers to expect some minimum standards to be in place? After all, we have a reasonable expectation that anything you'll find for sale on the high street  has been produced to a minimum standard - and that if it goes wrong, there is consumer protection in place to ensure you can get it fixed or get your money back. We do not demand that fridge-buyers have a degree in fridge-choosing and we do not berate them with "it's your own stupid fault" if they've gone out and bought a fridge that died on them a week after they got it.

The following day, Bill sent me an email accusing me of "sensational" and "unsubsantiated" figures regarding the incidence of Shar-pei Fever (I had told the meeting that it was estimated that up to 30 per cent of the breed was affected).

This is what the KC always accuses you of if they don't like what you say. But I don't make up figures. I wrote back to him and gave him this link, detailing what the condition's leading researchers, Linda Tintle and Jeff Vidt, estimate the frequency to be.

"A survey done at the 1991 CSPCA National Specialty and data from records at my own and Dr. Jeff Vidt's practice suggests that the incidence of FSF in Shar-Pei is about 23-28% affected.  I believe the incidence may be higher now," writes Linda Tintle, DVM.

Relating back to the conversation about the KC registering anything, Bill also wrote: "If the KC was able to refuse registration what would it achieve? Those unscrupulous breeders would continue to thrive, breeding non registered dogs! It is far better to attempt to keep them with us and try and educate them. I gave you examples of problem breeds that are thriving without KC support. Would you rather us abandon those breeds that have problems rather than try and work with them?  We can be whiter than white but all it will mean is that even more pups will be bred badly."

I emailed back to ask him what, exactly, was the KC doing to educate the breeder who is advertising her KC-reg'd shar-pei pups on Pets4Homes as "very, very wrinkly"? And added: "This KC endorsement legitimises their production. It's time it stopped and for the KC  to truly stand up for the dogs. Make the KC stamp a real badge of quality. At the moment you are being dragged through the mud through breeders like this, and it provides way too much ammunition for people like me."

Time for another poll.

Should the KC refuse to register puppies if they have not been bred to minimum health and welfare standards?

Posted by Jemima Harrison at 16:48