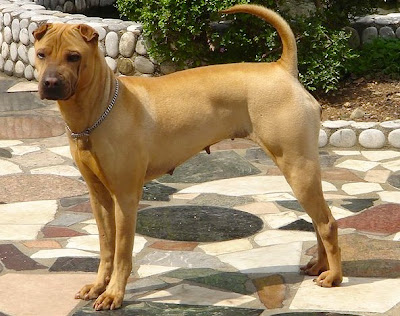 This is a traditional Shar-pei - still being bred by a handful of dedicated breeders in the Far East. As you can see, there is minimal wrinkling and the dog looks supremely fit and functional. Compare her to the Westernised version of the dog, below.  Yep, this is how we have 'improved' the Shar-pei, and many feel now that the breed is on the brink of viability because of their health problems (around one in four of the breed suffers from Shar-pei Fever, the complications of which are killing way too many young Shar-pei). Unfortunately, there is as yet no DNA test (although researchers believe they now have a candidate gene) and so many lines are affected that some top breeders don't even try to avoid breeding dogs that are likely to have the condition. 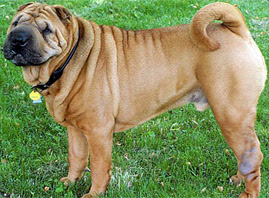 The traditional  dog is known as a "Bone-mouth" Shar-pei; the show-type as a "Meat-mouth". Here's why. 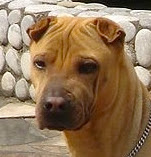 Note the difference in the eyes, too. It's obvious the traditonal Shar-pei is much less likely to be blighted by entropion, a problem so endemic in the western Shar-pei that pups routinely have to have the skin folds around their eyes stapled or stitched to prevent eye damage.

The sad story of how the West took a beautiful dog and ruined it is documented here:
If there is anyone west of Hong Kong breeding traditional Shar-pei, I would love to hear from them.
Posted by Jemima Harrison at 01:06