It's Puppy Awareness Week (1st-8th September) in the UK and the Kennel Club is already in full flood urging people to take care how they buy puppies.

This included a mail-out last week asking for help "putting bad breeders out of business". 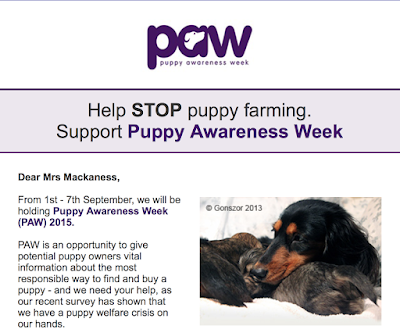 The mail-out has incensed Cavalier campaigner Charlotte Mackanass who today has sent a swingeing open letter to the Kennel Club demanding it puts its own house in order.

Mrs Mackanass accuses the KC of making inadequate demands of breeders, even those on the KC's elite Assured Breeder Scheme. She also alleges that the Kennel Club itself registers puppies bred by puppy farmers, highlighting one breeder that registered 11 litters of Cavalier puppies in just three months.


"This is a wonderful idea. Puppy farmers need to be stopped. As a dog lover, I would love to help put the bad breeders out of business and ensure that puppies are bred by those who truly care about their welfare. I would also gladly help give potential puppy owners vital information about the most responsible way to find and buy a puppy.

"This is a subject close to my heart as, having sought advice from the Kennel Club on where to find a responsibly-bred Cavalier puppy and then buying from a “top” breeder on the recommendation of a breed club Puppy Advisor, my little dog was diagnosed with severe Syringomyelia (SM) aged two. In hindsight, she started showing symptoms as early as six months. It transpired that the Kennel Club registered parents of my puppy had no recorded health tests and, to this day, the breeder has been unable to provide evidence that any of the required or recommended health tests were done despite the well-documented inherited health problems in the breed.

"It took me 18 months to find my next puppy from genuinely responsible breeders. Why so long? Because most Cavalier breeders, despite what they claim, do not test their breeding dogs or follow the breeding recommendations designed to reduce the incidence of the two most severe and painful health conditions.

"These experiences have meant that I cannot, in all conscience, spread the word about buying from a Kennel Club Assured Breeder. I know only too well that the Scheme requires very limited testing, which in no way addresses the serious inherited health issues and the non-compliance of breeding protocols by the majority of Cavalier breeders.

"I’m afraid that the Kennel Club itself first needs to put in place stringent steps to prevent the KC registration of litters from Puppy Farmers. Caroline Kisko, the Secretary of the Kennel Club, has recently said “We want to stress to people they should never pay money to someone they suspect of being a Puppy Farmer”. Your own KC website defines Puppy Farmers as “high volume breeders who breed puppies with little or no regard for the health and welfare of the puppies or their parents”. It must therefore be of concern to all who support the PAW campaign that one such high-volume breeder is shown as registering 11 Cavalier litters in three months in your latest Breed Record Supplement. The 11 mothers and four stud dogs have no health tests whatsoever shown on your website.

Mrs Mackanass is backing a petition asking the Kennel Club to only register Cavalier puppies from parents that have screened for syringomyelia and heart disease.  Currently, the KC registers thousands of Cavalier puppies ever year bred from untested stock.

The KC does demand more of Cavaliers bred under their Assured Breeder Scheme. But these represent only a small percentage of Cavalier puppies the KC registers and, astonishingly, only eye-testing is mandatory - screening for SM and heart disease is only a recommendation. (See here).


"I would like to draw the Kennel Club General Committee’s attention to a petition that has already gathered over 16,500 signatures. It promotes an idea that would identify responsible Cavalier breeders and so remove Puppy Farm dogs from KC registration: https://www.change.org/p/the-kennel-club-stop-registerin-g-cavalier-king-charles-spaniel-puppies-unless-their-parents-are-mri-scanned-and-heart-tested  "By implementing the suggestion that only litters from health-tested Cavalier parents are accepted for registration the KC would ensure that irresponsible breeders, who will not pay for health tests, are unable to register their poorly-bred litters. Buyers could then be confidently directed to the Kennel Club as truly being the place to find responsibly bred puppies. As a really significant bonus, the information on health testing would go to researchers so better testing and breeding methods can be devised?
Yours faithfullyCharlotte Mackaness


The KC's standard response to such demands is that if you ask too much of breeders, they will "go elsewhere".  It also argues that not enough is known about syringomyelia and that screening, which is expensive, does not guarantee an SM-free puppy. This is true enough - and it is also the case that estimates vary wildly about how many Cavaliers are affected. One recent paper put the incidence at only around 2 per cent while others have suggested that the brains of 70 per cent of older Cavaliers are abnormal.

However, what is in no doubt is that while some Cavaliers show no or only few symptoms, for others  this can be an extremely distressing condition - agonising for the dogs and expensive for their owners and not even the Kennel Club would argue otherwise.

There is also evidence that mandatory screening in Sweden has helped reduce the incidence of SM.

Says Charlotte: "Beebee started showing symptoms around six months. The most obvious was yelping when picked up. From the start, she’d always been a quiet puppy and not particularly boisterous. She didn’t jump on furniture, always trotted by my heels on walks rather than running off. For a long time, we just assumed it was her personality. As time went by the yelping became more frequent, she’d always roll on her tummy when greeting people (she wanted fuss but not her head touched) and she became extremely withdrawn. An MRI revealed severe CM/SM. Beebee is now on a high dose of neuropathic painkillers that cost well over £100 a month. She rarely yelps and is generally much more active and outgoing than she was. However, if you met her you’d probably think she was much older than three. She behaves like a rather delicate old lady."

There is also is still no official screening scheme for the Cavalier's most prevalent health issue: mitral valve disease - despite a KC commitment to the development of one more than nine years ago.

Please sign the petition here.  Seventeen thousand people - including celebrities - already have. Sooner or later, the KC is going to have to give in and do more for this blighted little breed.

More info and discussion to be found on the Cavaliers are Special Facebook page.