And the Saints go marching on

I blogged last week about the St Bernard who failed the check at the National Champ Dog Show two weeks ago. (See here.)

Vet John Goodyear failed the bitch (Chandlimore On The Bottle) on the grounds of eye pathology which included small eyes and - judging from pictures of the dog - poor overall eyelid anatomy. 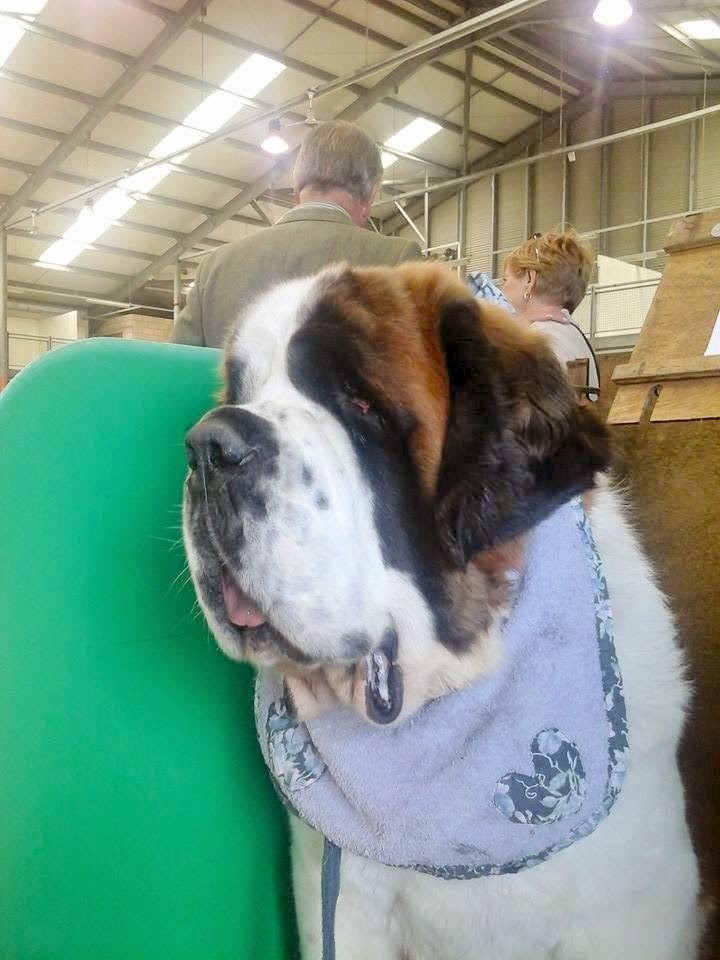 But, last weekend, the same dog won the Bitch CC at the Bath Championship Show and owner Tan Nagrecha elected to have the dog vet-checked (it is only mandatory for BOBs but he needs a pass for the dog to be made up to a champion).

Lo and behold, this time the dog passed.

What on earth is going on here?

I have no doubt that many in the show-world will use this to ridicule the vet checks. (The Canine Alliance has already waded in here). That's because most have hated the vet checks from the start, especially those in the breeds effected.

But, though flawed, the vet checks have proved to be be a powerful driver for change. There's a long way to go but we are - in the main - seeing less extreme dogs in the ring among the "high profile" (now called Category 3) breeds.

The answer, then, is not to scrap the vet checks - it's to make them more robust.

Yes, yes, but what happened here?

Here's my take on it:

The vet at the National was John Goodyear - an eye specialist.

The vet at Bath Champ Show was Chris Laurence - not an eye specialist - and, as it happens, a vet with a very long association with the Kennel Club/dog shows.

Did Laurence allow his relationship with the Fancy to over-ride common veterinary good sense?

Before you leap to an answer, here's the confounding factor:

Laurence failed the Best of Breed Saint - a dog called Bernmont Heathcliffe owned by Pat Muggleton - on the same day.

So here's what I think happened.

First, there is an element of subjectivity in all veterinary opinion. That's always going to be the case.

Second, I suspect Laurence was going by the book more than Goodyear.

This specific book is written by the Kennel Club and it makes quite clear that a vet cannot fail a dog on the evidence of pathology/poor conformation alone (because, let's face it, otherwise whole breeds would fail every time). The rules state, then, that there has to be evidence that the pathology is causing grief to the dog on the day - eg conjunctivitis, lameness etc.

The problem with the BOB dog on Sunday was, apparently, evidence of "mucous discharge" and excess tear production (epiphora). This would suggest sore eyes/irritation.

But if the report in Dog World is to be believed, vet John Goodyear failed the bitch at the National purely on poor eye-conformation.

Laurence appears to have stuck to the rules at Bath in passing the bitch CC. After all, he is pretty withering about the BOB he failed -and St Bernard eyes in general - telling Dog World:


"This dog had epiphora [excess tear production] in both eyes and discharge in one eye,” he said. "The problem with St Bernards is that they all have a degree of ectropion; it is a general issue with the breed, and this makes it more prone to any sort of eye problem. If you put a dog with ectropion in a situation where the eye becomes stressed and vulnerable that dog is likely to fail.

"When I do these checks I say to some owners to be careful because one day the dog will fail because the eyes are not normal; either there is ectropion or entropion or a degree of both and that makes it prone to eye disease. That’s why we do the checks.”

Of course, if  I was the bitch's owner, I would be inclined to take John Goodyear's opinion as the expert one and think very carefully about breeding from the dog.

But I imagine that Tan Nagrecha is cock-a-hoop with the result.  His bitch now has two CCs... only one more and she she will be made up to a champion and will soon, no doubt, to be the bearer of a new generation of saggy-eyed Saints.

Because that vet check fail can now be erased from history.

The KC's rules state the following:

You might think that would preclude Chandlimore On the Bottle from ever being made up to a champion. But it doesn't. "Final" only refers to the vet check on the day. There is nothing to stop a dog subsequently winning and passing a vet check at another show and for that to count towards the dog's championship.

It doesn't matter how many times the dog fails. Just one pass is enough.

Of course it's possible for a dog to go lame or bash an eye on the day... but a lame dog or one with a sore eye should be withdrawn from competition.

Just imagine if failing just one vet check was enough to prevent a dog ever being made up to Champion?

My guess is that it would lead to a very rapid improvement in conformation.

Hilariously, btw, the owner of Bernmont Heathcliffe, the BOB that failed his vet-check, puts the excess tear production down to the fact that it was "windy".

Says owner Pat Muggleton: "I wouldn’t take a dog to a show if it had bad eyes. The vet said my dog’s eye was a little bit wet but it was very windy where we were being judged. There’s nothing wrong with his eyes; his father and uncle were made up."

But here's his dam - Bernmont Sophie (who, incidentally, was bred without ever being hip-scored - a mandatory requirement for all St Bernards under the Assured Breeder Scheme) 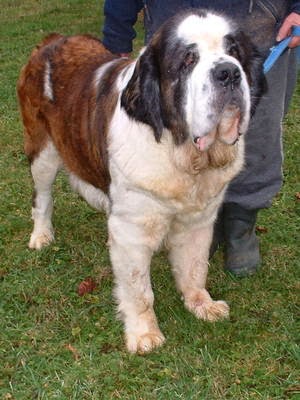 I am not sure, then, that Pat Muggleton should be entirely surprised that this dog's son does not have perfect eyes - or indeed perfect hips. Bernmont Heathcliffe's hip score is a high 19 (9/10).