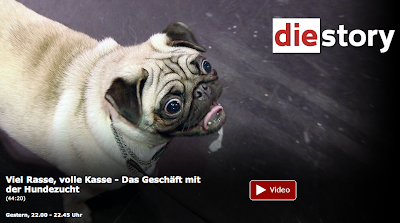 The first "German PDE" aired in Germany in August 2011 - a film by Phillip Hampl. Rather memorably, it kicked off with the mating of a Nova Scotia Duck Tolling Retriever to an Australian Shepherd, triggering swathes of German breeders to hyperventilate in horror.

Last night, Hampl returned to German screens with his sequel, which ended with a gathering of the now-adult offspring of that union trotting attractively around a beautiful field of wild-flowers - the not-so subliminal message: crossbreeding is one way out of the mess.

Hampl's original film did not provoke the reform in Germany that Pedigree Dogs Exposed triggered here in the UK.  In his sequel, Hampl urges the German Kennel Club - the VDH - to do more, and holds up the UK Kennel Club as something of an exemplar.

You can watch Hampl's sequel here. It features a fair bit of Crufts footage, including the ghastly-looking guppy-Pug above and something I had missed when I was there - which is that the Best of Breed Bulldog was wheeled to her vet check. I mean, really!

Hopefully Hampl's film will increase pressure on the VDH to do more - and the timing is pretty good. The 2nd International Workshop on Enhancement of Genetic Health in Pedigree Dogs is being held in Düsseldorf next year. If Hampl is right in his assessment of the situation in Germany, there's a very real danger of it being a whitewash - despite the Swedes' best efforts to secure reform.

The 1st workshop, in Sweden last year, managed to get a lot of Kennel Clubs - and other key stakeholders in canine genetic health - round the table for the first time. Progress report on that to come shortly...

Posted by Jemima Harrison at 09:17