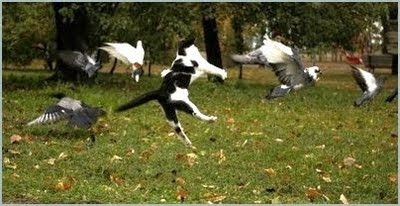 A few weeks ago, I was contacted by a well-spoken chap called Nick who runs a shoot in Scotland. He was looking for a young Flatcoat x Labrador bitch to pursue a family tradition. His father before him used to having working Flattie/Lab crosses and said they were the best gundogs he'd ever had.

Nick contacted me because I run a rescue specialising in retriever crosses. But of course I rarely know the ancestry of the dogs and just because they may look the part doesn't mean they can do the job.

Most of our dogs have some collie in them; many have a strong retrieve instinct, but they often have a less-than-soft mouth. And despite the world and her mother always calling anything black and long-haired a Flat-coated Retriever cross, the truth is that most are not. In fact, I'd go so far as to say that I haven't had a single Flatcoat cross through my rescue since I started it six years ago. We have had several golden retriever crosses (which are often black) but there are so few working goldies now - not the best breed if you want a dog to work.

Of course, you can occasionally find flattie x lab crosses advertised on Epupz and the like. But they are usually pet-bred. Who knows if they would work?

Nope, what Nick really needs is a dog bred specifically for his purpose. And the call was timely as I've been thinking a lot about exactly this cross.

Flatcoats have a problem - a big problem - with cancer.  Every line is affected by it and not a week goes by that I don't hear about another young Flatcoat dying of what has become the scourge of the breed.

Despite breeders' best efforts - and they are in the main a health-conscious lot who are fiercely protective of their breed - I believe there is no way out of this within the breed. The Flatcoat gene pool is just too bloody small; too many lines blighted. I also believe that the issue here may be as much due to an immune system compromised by inbreeding as to specific mutated genes passing on a deadly inheritance. For previous posts on cancer in Flatcoats, see here and here and here.

And so I believe an outcross is needed and that a cross to the Labrador is the obvious choice.

Flatcoats were interbred with Labradors post World War II to boost numbers (and genetic diversity) when the breed almost went extinct. They share a common ancestry and a common working purpose.

Now many working Labrador folk find Flatcoats too, well, independent in the field - and the working Flatcoat folk diss Labradors as being too like automatons. But they aren't all that different. Not really.

There is no way that the Flatcoat or Labrador breed clubs will stomach such a cross, though - not officially.

So I'm going to put the cat among the pigeons and act as a matchmaker on behalf of Nick (and others I know who would be keenly interested in such a cross).

If you have a fully health-tested Flatcoat or Labrador with proven working ability that you would allow to be used in such an outcross - or if you would like to contribute your thoughts and/or wisdom to the idea outside of this blog, please contact me: jem@pedigreedogsexposed.com.