The grim reality of Bulldog sex 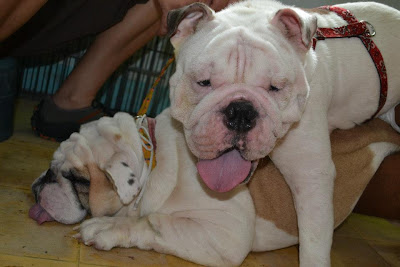 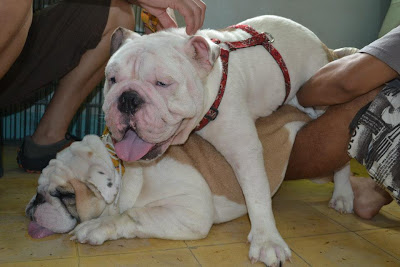 This is what's known as a "natural mating" in Bulldogs (distinct, that is, from artificial insemination).

Do they ever give rohypnol to dogs?

From SOS DOG: The Purebred Dog Hobby Re-examined by Johan and Edith Gallant.

"Most of the breeders are very well aware of fertility cycles, and a bitch that finds herself close to the eleventh day is often loaded in a car destined to the breeder’s idea of her perfect mate. Since time equals money, it is expected from the bitch that, on arrival, she courteously concedes her rump to the male and lifts her tail out of the way to enable a rapid and uncomplicated mating. Should the bitch, on arrival, refuse advances from the male, she will be characterised as dangerous. Most often she will then be escorted to a small enclosure, have her muzzle tied-up and have her body held still, ready to be mounted by the “mating machine.”


"It is amazing how many breed speciality books advise the newcomers and aspiring breeders about the dangers of mating. The unwilling bitch could bite the stud dog and ruin him for life! Once the stud has penetrated and the genital lock or tie is effective, a restless bitch could remain agitated tot he point that the penile bone causes internal damage or breaks! The authors of such books then advise that the bitch should be muzzled at arrival by tying a silk stocking or pantyhose around her snout and behind her ears, that she should be help up so that the male can easily mount her and that she should be firmly restrained from turning her head back and from growling at the stud. Once the active part of the mating is over, the the owner of the male should carefully lift one of its hind legs over the back of the bitch so that they stand backside to backside, and they should both be restrained until the end of the genital lock and thereupon be separated without allowing further contact between the two partners.


"Theoretically speaking, the sperm cells have found their way to the ova and all is well that ends well. This is rape, and what the deep consequences of such an act could be on an animal that genetically has been programmed for reproductive behaviour within its social group, has not provoked one criticism.


"It remains a fact that for highly social animals, such as dogs, a 'par force' inducted mating can precipitate enormous stress on the female. Dogs are highly susceptible to stress. In nature and in domesticated dogs, too, stress plays an evolutionary role. It fosters an unyeilding condition or atmossphere ie a condition in which reproduction would best be interrupted or terminated. Therefore, stress can cause the failure of coming in season, re-absorption of the fetus, premature birth or stillborn pups. When a mating is enforced on a bitch with human assistance (it would not happen without) we create a stress situation where the detrimental consequences are beyond calculation. Such a scenario is not only detrimental to the bitch, it actually also works in favor of stud dogs without guts i.e. Those that lack the natural sexual behavioural patterns dictating courtship and the necessary convincing attitude and drive to mate. Human assistance not only tolerates but also encourages males that in nature would never stand a chance to mate. Of course such matings may produce the desired color, the chiseled head that one is after or improve on any of the external features described in the breed standard, but the chances that it is instrumental in improving mental stability and true canine behaviour is remote.


"Because 'par force' inducted mating brings two individuals together that most likely would not mate under natural conditions, the offspring that they produce are in fact contrary to nature and improvement of the breed concerned. When we are faced in modern dogdom with an endless list of complications in canine reproductive behaviour and with general behavioural disorders, their origins can be found to a large extent in human-induced mating, which in many cases has been applied over consecutive generations."

Posted by Jemima Harrison at 13:33